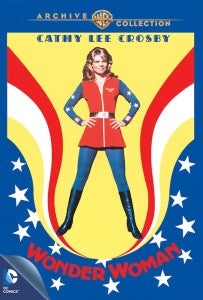 Cathy Lee Crosby's Wonder Woman TV pilot -- the version of the series that pre-dated Lynda Carter's and was meant to reflect the Dennis O'Neill "mod" era of the character in the comics -- is coming to DVD via the Warner Archive next week, the studio announced today, along with the second season of Superman: The Movie producer Alexander Salkind's Superboy.

The pilot aired in 1974 but was not picked up to series and ultimately the Carter version came along and stands as the iconic screen version of Diana's adventures. At the time, it was actually the second attempt in less than ten years to bring the character to the small screen following Wonder Woman: Who's Afraid of Diana Prince, which exists only as a short film and was not even filmed completely before being scrapped.

As developed by scribe John D.F. Black (Star Trek, Shaft), and seemingly influenced by her then-recent turn as a mod, cat-suited crimefighter in the pages of her DC Comics home, this Amazon Princess was more super-spy than superhero -- a role that she would periodically return to all the way up until the New 52 relaunch reset her origins.

Still, many of the expected more fantastical elements from the comics -- from bracelets and lassos to Paradise Island and invisible jets -- make an appearance, albeit with a sleek, seventies espionage super-action refit. Three years before taking up residence on Fantasy Island, Ricardo Montalban plays laconic lothario Abner Smith, who lurks at the top of the conspiracy to make off with ultra-secret code books – leading Agent Prince to discover an Amazon sister-in-exile (Anitra Ford).