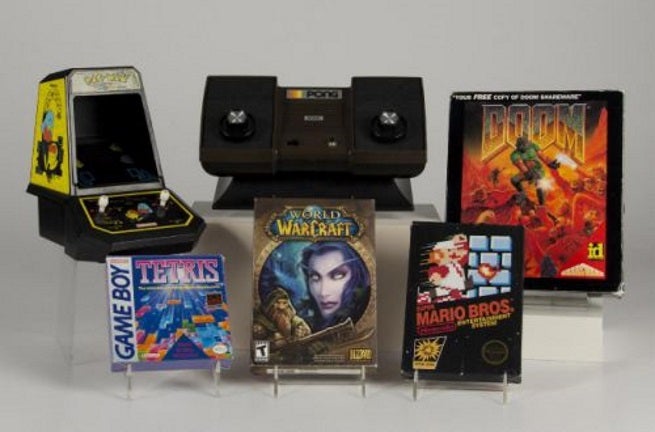 The Strong's World Video Game Hall of Fame has announced the six games that make up its inaugural class of inductees, and they span multiple decades, countries of origin, gaming platforms, and genre.

The inductees were chosen from a field of 15 finalist, which also included Angry Birds, FIFA, The Legend of Zelda, Minecraft, The Oregon Trail, Pokémon, The Sims, Sonic the Hedgehog, and Space Invaders.

The games chosen for induction are:

Pong: By most measures of popular impact, Pong (1972) launched the video game industry. A simple game involving two paddles and a ball, Pong introduced millions to the joys of playing video games. Although it was not the first electronic game, and the Magnavox Odyssey home console already featured a similar tennis game, Pong was the first game to grab wide-scale public attention. Its success propelled Atari into a preeminent role in the video game industry. Decades after its launch, Pong's iconic sound, intuitive controls, and satisfying game play still resonate, inviting people to try their hand at keeping the ball bouncing as long as possible.

Pac-Man: Pac-Man, which debuted in 1980, pushed video games forward as a mass cultural phenomenon. The simple maze game captured the imagination of millions of people and became the best-selling arcade video game ever. At the same time, Pac-Man himself became the first iconic ambassador of the video game era—at once symbolizing video gaming and transcending it as he crossed over into mass culture. The game launched the first massive video game licensing craze, spurring the sale of home consoles, handheld devices, toys, clothing, and even housewares. Since its release, Pac-Man and its many variations and sequels have munched their way into countless arcades, homes, and new digital spaces.

Tetris: Tetris sprang from the Soviet Union in 1984 and spread to other Eastern European countries. In 1987, Tetris launched on PCs in North America and Europe. A rollicking Russian folk tune gave it an unforgettable soundtrack. And when the Japanese video game developer Nintendo packaged it with the debut of the Game Boy handheld system in 1989, it traveled to every corner of the globe, selling hundreds of millions of copies across a variety of platforms. It's become such a cultural icon that the game has even been projected on the sides of buildings gracing the skylines of cities around the world.

Super Mario Bros. Created by legendary game designer Shigeru Miyamoto, Super Mario Bros. jumped onto the scene in 1985, quickly becoming one of the most recognizable games ever. Mario first appeared as Jumpman in the arcade game Donkey Kongbut gained icon status through Super Mario Bros. Mario's infectious, upbeat personality helped reinvigorate the struggling video game market. Since his introduction, the character of Mario has appeared in more than 200 games and on every Nintendo console ever created. Mario himself not only became the face of Nintendo, but also the face of the video game industry as a whole.

DOOM: DOOM exploded onto the video game landscape in 1993 and helped shape the course of gaming history by introducing the idea of a game "engine" (separating the game's basic functions from other aspects, such as artwork), encouraging multiplayer interaction, and popularizing the first-person shooter genre. DOOM was a commercial success, but its most important legacy is the impact that it has had on the form, function, feel, and perception of so many games that followed, such as Half-Lifeand Halo. DOOM also became a highly visible symbol of the widespread debate over the role of games and violence in society that emerged in the 1990s.

World of Warcraft: By bringing tens of millions of people together in a compelling virtual universe, World of Warcraftcontinues to reshape the way people think about their online lives and communities. In this "massively multiplayer online role-playing game" (MMORPG), players create unique virtual avatars to represent themselves as they explore an open, constantly evolving world. After its release by Blizzard Entertainment in 2004, World of Warcraft became the largest and best-selling MMORPG ever created. As of February 2015, the game boasted more than 10 million subscribers—only slightly reduced from its peak of 12 million in October 2010—with 100 million accounts created since the game's release.

The World Video Game Hall of Fame at The Strong was established in 2015 to recognize individual electronic games of all types—arcade, console, computer, handheld, and mobile—that have enjoyed popularity over a sustained period and have exerted influence on the video game industry or on popular culture and society in general. Inductees were announced at The Strong museum in Rochester, New York, on June 4, 2015 and are on permanent view in the museum's eGameRevolution exhibit. Anyone may nominate a game to the World Video Game Hall of Fame. Nominations for the class of 2016 will be accepted through March 31, 2016. Final selections will be made on the advice of journalists, scholars, and other individuals familiar with the history of video games and their role in society.