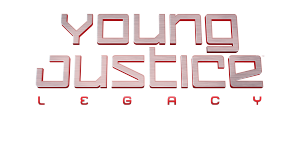 Reed Livingston (producer) and Sharon Scott (story lead) recently took the time to answer some questions about the upcoming video game Young Justice: Legacy. They discuss where the story fits in with the show, gameplay, and more. With Young Justice constantly going on hiatus on TV and the comic coming to an end, is the game still on track for its early 2013 release date? The airing of the show or the comic (or any hiatus they might take) has no bearing on the release date of the game. We are on track for release in the Spring of 2013. Where does the story fit in with the continuity of the show and can you give us a rundown of it? The game story takes place a little over a year before the events of Season Two. The Team has changed in size and experience since its inception. While some might think of it as a training ground for up-and-coming Justice League members, the young superhero squad is really the Justice League's go-to covert ops team. The story starts when an archaeologist is kidnapped and Batman requests the help of the Team in finding her. It isn't long before the Team realizes that she is being forced into locating pieces of an ancient artifact with the power to destroy the world. How did you decide which members of the team you wanted to include? Obviously, we felt the need to start with the initial six Team members from Season One. Then we decided on the major event we were going to focus on (a story that will shed some light on the makeup of the Team in Season Two). We worked with Greg Weisman and Brandon Vietti (the Young Justice show producers) to hone who would or would not have been a part of the Team by this time in the continuity. [caption id="attachment_33162" align="alignright" width="300"] 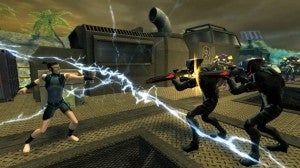 Tempest joins the team in Young Justice: Legacy[/caption] Our emphasis was on giving fans the opportunity to play their favorite characters while meeting the needs of variety and balance in gameplay. To accomplish that, we divided them up into skill categories (i.e. magic users, fighters, stealth characters) and then tested their skills against each other until we felt the game played evenly. What villains can we expect to run into? We have 12 villains in the game. The first 11 are: Lex Luthor, Sportsmaster, Cheshire, Icicle Jr., Killer Frost, Black Manta, Psimon, Riddler, Blockbuster, Bane, and Klarion. The 12th villain is one we created exclusively for the final boss battle of the game. Were there any characters you wanted to use, but couldn't? Early storylines toyed with a lot of other possible characters (Wonder Woman, Captain Marvel, among others), but after settling on the final storyline, some of those choices no longer fit. Other than making decisions like those, we were given access to every character we were interested in. From screenshots, the gameplay looks similar to that of the X-Men Legends/Ultimate Alliance series from Marvel. Is this a fair comparison? If not, what kind of gameplay can we expect? That style of game is definitely what we were going for initially, though we wanted to add even more "classic" ARPG elements, like ancient locations and a dungeon-crawl-like feel. Are there special moves or team up moves planned for characters? Each of the playable characters has a number of signature moves and superpowers, all of which will be instantly recognizable to fans of the show, from Nightwing's martial arts to Miss Martian's invisibility. Plus, the game features a special Team Boost system that will temporarily give your squad a huge bonus to their offensive abilities, but it'll require a bit of coordination to pull off. Just like in the show, the team works best when they work together! You recently revealed that characters like Superman, Batman, and Green Lantern will be assisting the team in different missions. Are these strictly story based or will we see a support/summon type system? Will they have any interactive moves with different team members? [caption id="attachment_33163" align="alignleft" width="300"] 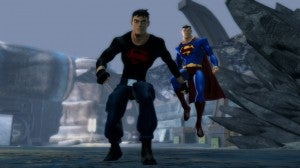 Superboy and Superman team up.[/caption] We were firm about wanting to make a true Young Justice game rather than a Justice League game. We also wanted to make it clear that the YJ Team can hold their own without calling on the League for help when situations became difficult. But we wanted to provide gamers and fans an opportunity to play alongside some of the Justice League characters in the context of the game, especially those who could be defined as "mentors" to the Team. So we devised several places in the story where Justice League members show up and need the Team's aid in completing a mission. What all is planned for multiplayer? All of the game's story missions are available for both local and online co-op multiplayer for up to 3 players. Progress is shared in both single and multiplayer, but you won't be able to join any online multiplayer game on a mission that is beyond your point of personal progress. Were you given freedom in terms of crafting the game you wanted or was there a lot of input from DC/Warner Brothers? Right from the start, WB was accommodating and eager to collaborate. Like us, they recognized the inherent fit between the concept of the show and the style of game we wanted to make, which was a classic action RPG. Leveling up, upgrading equipment, and training skills were all gameplay elements that seemed natural to apply to a group of heroes-in-training. The platforms listed for the game are the XBox360, PS3, and Nintendo DS/3DS. Can Wii/WiiU users expect a version for themselves? We can't give a definitive answer at this time. However, we are considering versions on as many platforms as possible. Young Justice is seen by many as the new definitive DC Animated property. Do you think the game will live up to the standard set by the show? We certainly hope so. We feel we brought our passion for the show to the development of the game, including months of story design, the utilization of fan-favorite characters, as well as the original show's cast for voiceover in the game. Anything you can tell us that hasn't been revealed about the game yet? The Young Justice:Legacy Facebook page has become the primary source for news, screenshots, and updates, including bits of information we hadn't yet intended to leak. Clearly, Young Justice fans are smart, keen, and VERY well informed already. Young Justice: Legacy is on schedule for an early 2013 release on the XBox 360, Playstation 3, and Nintendo DS. Thanks to the team at Little Orbit for taking the time to answer these questions. Young Justice: Legacy on Facebook Young Justice Legacy on Twitter