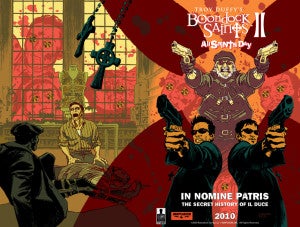 At this weekend's Calgary Comic & Entertainment Expo (also known as the C2E2 of Canada, except we're making that up), actor Sean Patrick Flanery confirmed for the audience that Boondock Saints 3, often rumored and just as often seemingly trapped in development hell, is still happening--and in fact that the recent terror attack in Boston gave them a little motivation to bring the revenge-minded Boston brothers to the big screen again. "After the recent tragedies hit Boston I texted (director) Troy Duffy to ask him about when he would work on the third one and he replied 'on it'," The Daily Blam quotes Flanery as saying. In the films, Flanery stars alongside The Walking Dead's Norman Reedus, making the timing arguably better than ever for a third movie, with Reedus being one of the most beloved actors on television. In addition to two feature films, the brothers have starred in a series of comic books, which the actors and Duffy had a hand in. You can check out about 20 minutes of panel video below.

Boondock Saints 3 Back in Development After Terror Attack in Boston