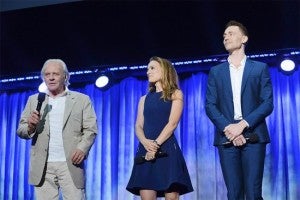 My second day at D23 started earlier than my first. I wanted to avoid any confusion in getting to the big arena presentation ComicBook.com was sending me to: Let the Adventures Begin: Live Action at the Walt Disney Studios. I also wanted coffee beforehand… and maybe a bagel. Unfortunately, this being the biggest day of the Expo conspired against me, as the parking lot was full when I got there, cones being put up just as it was my turn to hang a right in there. I was told to loop around and park somewhere else I didn't hear clearly. This lead to some driving around Anaheim and my considering just going home. But then I remembered how much fun I had at the Art and Imagination presentation on Friday and figured it'd be worth finding another parking structure and laying down the cash to keep my car there for the day. Even when I got back to the convention center and they were now letting people in, I decided to calm my ever-present anger and just continue on, excited for the possibilities of Marvel and STAR WARS-related movie nuggets. There was a lot of excitement and a little chaos in the air as I made my way through the convention center, past Disney Princesses hanging out with Marvel Superheroes and Storm Troopers, hustling toward the Arena, stomach empty but excited. Once seated, cell phone bagged and sealed for the sake of secrecy (though laptops were allowed, which, I mean… never mind), I wondered what we'd see. Truth time: I'm a fan to varying degrees of all the movies Marvel has put out so far, so that was what I was really excited to see. As the lights went down, visions of Thor and Captain Americadanced in my head, which was... weird. I don't want to explore my visions too much. Anyway… The chairman of Walt Disney Studios, Alan Horn, started the show. Between him and Bob Iger the day before, I wonder if there are super casual, fun stage presence classes at Disney, because these guys are good. Not as good was Horn's welcoming of Lucasfilm to Disney. He made a joke that he was going to say something, then the Imperial March cut him off, and he said dark forces forbade him. It was kind of funny, but a guy in a Darth Vader costume or even Mark Hamill (because, come on, he was probably THERE anyway, trying to score free swag) just trotting out on stage might've been enough. 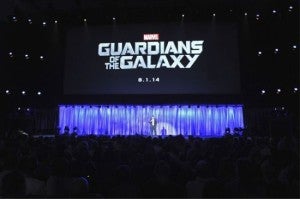 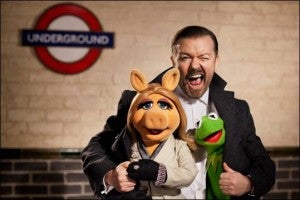 Also looking great is the new Muppets movie, MUPPETS MOST WANTED, which was introduced by President of Walt Disney Studios Motion Picture Production Sean Bailey, who took over the live action presentations. Ty Burrell was on hand, as were Miss Piggy, Kermit, and Tina Fey via pre-taped footage. It looks fun, and I'm glad Muppets movies are being made again. Also, I forgot former almost-pop star Ricky Gervais (link to his pop glory, perhaps?) could sing, so the scene they showed was a pleasant surprise. They went on to promote an adaptation of the hit Broadway show INTO THE WOODS, as well as Kenneth Branagh's live action take on CINERELLA, and a movie based upon the SLEEPING BEAUTY villain MALEFICENT. Angelina Jolie was on hand to chat about that, and the footage they let us see showed that she's nailed the character. There was some iffy CG, but her performance seemed like Disney's scariest villain come to life. I could do with less prequel/origin stories, but MALEFICENT looks worth giving a shot. They ended the epic presentation with SAVING MR. BANKS, a movie about Walt Disney's 20-year quest to film the MARY POPPINS books, despite her creator, P.L. Travers' lack of interest. It looks like a pleasant movie, with a pleasant cast headed up by Tom Hanks not really doing an impression of Walt as Walt, and Emma Thompson as Poppins' creator, P.L. Travers. The cast members brought to the stage, though, were a game Jason Schwartzman and an uncomfortable looking B.J. Novak, who play the Sherman Brothers, writers of all those wonderful MARY POPPINS songs. The movie looks pretty fun, especially if you're a POPPINS fan, and the whole presentation ended with Schwartzman, Novak, and the real-life Richard Sherman singing the classic MARY POPPINS song "Let's Go Fly A Kite," complete with folks in costume running around onstage and in the crowed, flying kites. All in all, this was a great presentation, though it could've used something about STAR WARS other than the fact that Disney is making new ones, and I might've saved Marvel for last, personally, but… minor quibbles, because, yeah, "Phase Three" of the Marvel movie universe? Based upon what I saw at this presentation, it's going to be AWESOME.