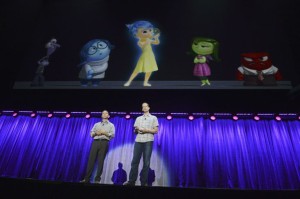 Living in Los Angeles has its perks. Aside from the great weather and… the great weather, sometimes the fine folks at ComicBook.com can't make it to an event on this coast and ask me to go in their stead. This is what happened at this year's D23 Expo, to which they sent me to cover Disney's two big arena shows. I'm a frequent comic convention goer, but I don't usually wait in line for the big panels, so this would be my chance to experience that kind of extravaganza. On Friday, I arrived at D23, around an hour before the Art and Imagination: Animation at The Walt Disney Studios arena show started at 10:30 AM. Plenty of time! Just needed to get my badge, and then I'd walk right in to take my reserved seat… yeah! No problems. It was then that I saw a major difference between D23 and something like Comic-Con International: Disney loves single file lines. I know there are always lines to get into big panels, but this line was to get into the convention center itself, and it basically circled around the building. It was the longest line I'd ever seen. I assumed there was no way I'd get inside in time for the presentation and was ready to tell them I'd failed before I began, suffering all due humiliation. As I wandered to the end of the line, day turning to night and back again in my brain, a fellow press person who heard my plight as I mumbled to myself, told me she noticed an Arena sign that I didn't. I decided to skip the line and find my way in, Lois Lane-style. (No, not Clark Kent-style. Lois is the snoopy go-getter). This is when the kindly D23 staff saved the day, directing me to the quickest route to the Arena around the back of the building, going into gray doors and seeing a bunch of people in red shirts ready to pounce on the day. I made it with maybe three minutes to spare and was directed to a reserved seat! Thank goodness I didn't give up, as this presentation was quite entertaining and impressive. Disney Chairman Bob Iger kicked things off. When he mentioned all the companies now under the Disney banner, I realized they own about 90% of my childhood. After a monologue that makes him a candidate to have his own late night talk show, he introduced the man of the morning, John Lasseter, and the show really got started. Lasseter oversees all three of Disney's animation divisions: Pixar, Walt Disney Studios, and Disneytoons. He went through the production slates of each company, starting with Pixar. After a shout out to this Summer's MONSTERS UNIVERSITY, in which he brought out the voice of the Slug, Bill Hader, they showed the world premiere of a new Pixar short that takes place in that world: PARTY CENTERAL. It was a very funny take on frat parties, featuring monsters and taking advantage of their door technology to get goods from other frat parties -- fun shenanigans, basically. Also, I want to try "door jamming." (You'll know what that is when you see it in front of Pixar's next movie THE GOOD DINOSAUR.) 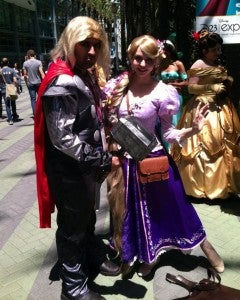 Speaking of that, Lasseter said that all Pixar movies start with a "what if…?" question. "What if toys came to life when humans weren't in the room?" "What if there really were monsters in the closet?" And the new one, "What if the asteroid missed Earth 65 million years ago, and the dinosaurs survived?" The behind-the-scenes look at THE GOOD DINOSAUR make it look very fun and touching. Dinosaurs are farmers, using their bodies as the machines, and crop-destroying bugs are their many enemies/pests. The titular good dino, Arlo, likes bugs, though, and meets a very strange looking one: the first human. He names the little guy "Spot," and the film looks to be a journey adventure with buddy bonding and warmed hearts. It also, like almost every Pixar movie, features Bill Hader to the point that he talked about being their new good luck charm. This brought out their current good luck charm, John Ratzenberger, complete with a marching band, to defend his title, having appeared in fourteen Pixar movies. It was a good time. The presentations continued like that, introducing directors and upcoming movies, including INSIDE OUT (formerly called "The Untitled Pixar Movie That Takes You Inside The Mind" -- my personal favorite title), which looks like an amazing, visually stunning version of the old sitcom HERMAN'S HEAD. I don't mean to sound dismissive, as the movie is one I'm most looking forward to after this presentation. Also coming up is a sequel to FINDING NEMO called FINDING DORY, and a TOY STORY television special called TOY STORY OF TERROR, of which they shared the first ten minutes of surprisingly feature-quality animation. Next up he went thorugh the Disneytoons slate, stating that while that company was created to make sequels, he sees it as a way to expand the worlds of their films and seemed genuinely excited. One of the highlights was THE PIRATE FAIRY, mainly because Christina Hendricks and Tom Hiddleston came out to talk about their roles in it. This is when I realized Loki was the king of the stage, as he somehow stole all the attention away from Hendricks, even singing some of his favorite Disney song, "The Bare Necessities." That guy's going places. They also discussed PLANES and its already in production sequel PLANES: FIRE AND RESCUE. Um, Dane Cook was there at one point, too. 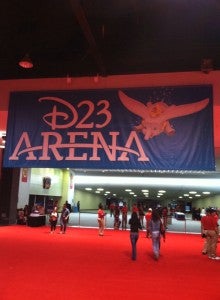 Finally they talked about the studio that started it all, Walt Disney Animation Studios. They did a tribute to the only current staff member who personally worked with Walt himself, Burny Mattinson. They guy started right out of high school in 1953 and is still there. Burny seemed touched, and it all felt nice and genuine. In keeping with the theme of appreciating their legacy, they brought out a presentation from the Animation Research Library involving a recently discovered piece of Mickey Mouse art labeled "MM4." It was quite intriguing, but Lasseter swore us all to secrecy on the details… I'm guessing most people who attended haven't done that, but I will just in case. All will be revealed before their upcoming feature FROZEN, apparently. Next was one probably of great interest to readers of ComicBook.com: BIG HERO 6. I vaguely remember reading about this comic when Marvel first put it out a few years ago, but it definitely wasn't a property on a lot of radars for the movie treatment -- especially Disney's first animated Marvel movie. Still, the director, Don Hall, explained that its comparatively underground status was part of what attracted him to it. There was very little completed footage, but they did a fun comic book-style montage, introducing us to the world of San Fransokyo, filled with inflatable robots, bad guys stealing good guy technology, and fun superhero action. I have high hopes for this one next year. They also showed production art from ZOOTOPIA, a talking animals-in-clothes movie in the tradition of ROBIN HOOD. The way director Byron Howard and writer Jared Bush were talking about their process in coming up with a world ruled by animals, and how their technology and architecture would differ from ours was all very quirky and entertaining. Finally, they discussed FROZEN, a project based upon Hans Christian Anderson's "The Show Queen," a story Walt himself was interested in back in the proverbial day. Directors Chris Buck and Jennifer Lee showed clips and chatted with voice actors Kristin Bell and Josh Gads on stage about the project and how much everyone loves Disney. Then the voice of the Elsa (the Snow Queen herself), Idina Menzel, took the stage to perform a song from the film, "Let It Go," and it was quite the showstopper and a great ending to the presentation. Over three hours later, and I think everyone was a little exhausted and overwhelmed, but in good ways. Disney knows how to put on a show, and they impressed with the passion for animation projected at this Art and Imagination presentation.

D23 Expo: The Art and Imagination: Animation at The Walt Disney Studios Presentation