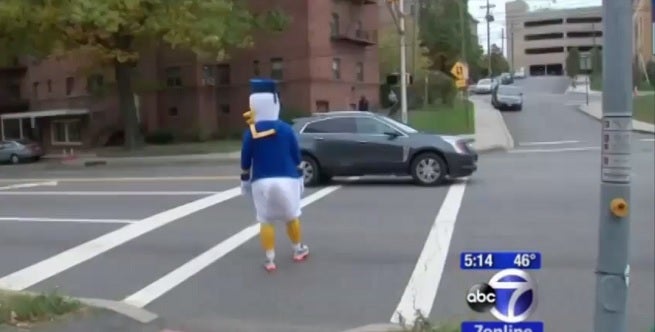 Marvel's Howard the Duck might not get any respect, but another Disney-owned water fowl apparently has the ear of local authorities in Fort Lee, New Jersey.

The local police department are responding to complaints after a local news story went viral online detailing a plan to catch drivers who weren't stopping for pedestrians in a crosswalk.

Karen Haigh, one of over 100 drivers who got such a ticket, says she plans to fight the $230 fine she got on Halloween because she felt intimidated and threatened by the more than 6' tall undercover police officer dressed as Donald Duck. According to Haigh, the officer was acting erratically.

"This duck kept going to the curb, off the curb," she said. "I thought it was a crazy guy on Halloween."

You can see the news report, which includes video of the Donald Duck in question during his sting operation, below.

"Two years ago, we had 62 people struck," Chief Keith Bendul says in the report. "This year, we had 40, I'm glad to say. But zero is my ultimate goal."

"When you see a pedestrian, if it's a child, an adult, even if it's a seven-foot duck, stop," Bendul added. "Let them cross and proceed with your day."

Drivers Ticketed For Failing To Yield To Donald Duck