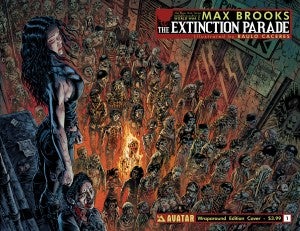 Based on a freely-distributed short story by best-selling author Max Brooks, The Extinction Parade probably never seemed a likely candidate to make anybody a lot of money. Yet, that's exactly what Brooks, artist Raulo Caceres and Avatar Press are doing, as they turn the story of a war between vampires and zombies into a 11-issue limited comic book series beginning in June, just before Brooks's novel World War Z heads to cinemas as the most expensive zombie movie ever made, with Brad Pitt and The Killing's Mireille Enos in the lead roles. "When I was a kid, I accidentally stumbled across an Italian zombie movie on cable," Brooks said. "It scared the crap out of me. The idea of a mindless, relentless, endlessly multiplying threat was unlike anything I'd ever seen. All previous monster movies were, at least to me, punishment movies. All their victims had made bad decisions; they had gone swimming after dark; they'd moved into a haunted house; they'd answered a signal from an alien planet… they had been consciously or unconsciously looking for trouble. And they found it. Not so with zombies. They came after people who were just minding their own business. They came after everyone." And in a world where a few vampires had been essentially lounging around, feeding off humanity for their whole long lives, the notion of a populace that's both dying off and trying to find new ways to defend themselves against the undead is a very real threat. This isn't your typical "X versus Y" story where everything is whiz-bang, the concept is 99% of the story and it's all really about how it affects humanity. In Brooks's tale, the vampires themselves are facing extinction, even if they themselves aren't being victimized. 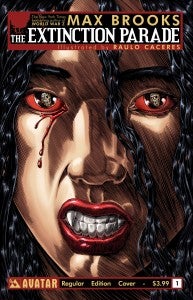 Brooks joined ComicBook.com to talk briefly about the series, the unique challenges of writing comics versus other literature and the pressure of adapting both his own work and that of others. The Extinction Parade #1 hits stores on June 19. ComicBook.com: Obviously you don't come from a comics background, but you've written plenty of comics. How did doing very kind of structurally-regimented things like The Zombie Survival Guide and World War Z early in your career help you develop a more diverse toolkit as a writer? Max Brooks: I think The Zombie Survival Guide: Recorded Attacks was an important bridge for me. It was essentially a graphic companion to the first book adapting stories from the back of The Zombie Survival Guide. Because the stories were already written, I could focus on the technical side of comics; action description for the artist as well as the angles, light and all the other details necessary for creating a visual story. It was a steep learning curve and it helped become comfortable with telling stories in a comic book format. ComicBook.com: There are a lot of these permutations that have become popular now. Take zombies, vampires, robots, kaiju, historical figures, whatever and just have them go at it. But the premise of Extinction Parade sounds a bit less tongue-in-cheek than most. How did it occur to you that the concept of "fight for our food" kind of made sense? 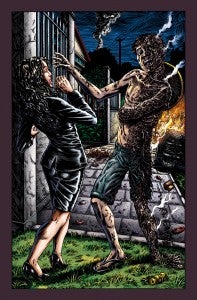 Brooks: This is definitely not a tough-in-cheek story. Extinction Parade is deadly serious. I'm trying to tell the story of a species confronted with its own demise, a species that previously believed it was more or less invincible. In The Extinction Parade, I wanted to explore the dangers that come with perceived privilege; the arrogance, the ignorance, the complete inexperience with struggle. Here is a species that always believed itself to be at the top of the food chain and therefore never developed the kind of coping mechanisms we as 'weaker' humans were forced to adopt. Here's a species that suddenly has confront the fact that all their supposed strengths might actually be fatal weaknesses. ComicBook.com: Is the kind of "adaptation pressure" different when adapting your own work (for things like this and the Zombie Survival Guide Reported Attacks book) or playing with somebody else's toys (a la your G.I. Joe stuff)? Which is tougher? Brooks: G.I. Joe was much harder. For starters, it's not my property. G.I. Joe is an established brand so there's always the pressure of fans hating what I've done, that I've gone into their room and, as you said, messed up their toys. Even the process was more difficult because I had to answer to so many other parties. There was IDW and above them there was HASBRO. I'm surprised a Toy company let me do half the things I wanted to do. You don't even want to know what G.I. Joe: Hearts and Minds would have looked like if I'd been given free reign.