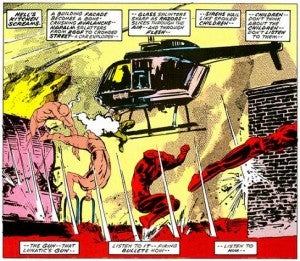 Insiders at Fox are "strenuously denying" that there are any negotiations underway to trade properties with Marvel Studios in exchange for keeping their hopes of a Daredevil reboot by director Joe Carnahan alive, according to a report at Deadline Hollywood. The studio claims that the negotiations underway are geared toward co-financing a Daredevil film with Disney, which would allow Fox and Carnahan to make their version of the film without running afoul of Marvel's new owners. Fox is facing its own Hollywood deadline, as the rights to Matt Murdock's horn-headed alter ego will revert to Marvel Studios (and by extension Disney) if the film isn't in production by October 10. With no formal deal in place with Carnahan, no stars and no official greenlight for the proposed movie, that's incredibly unlikely to happen. Earlier this summer, director David Slade, who had been working on the film for Fox for quite some time, dropped out and the project appeared in grave danger; today, reports emerged that Fox was negotiating with Disney to keep Carnahan's pitch alive, and that Marvel had asked for Galactus and Silver Surfer's rights to revert to Disney in exchange for an extension on Daredevil. Even then, there was no indication as to whether or not Fox would say yes. Fox suggests that they would sooner walk away from the Daredevil reboot than hand over rights to characters important to the Fantastic Four, given that they're invested in Josh Trank, who is set to reboot the Fantastic Four. Of course, there's no telling whether the property-trade is still a possibility, but Fox is trying to leverage a change in the terms by going public with their willingness to abandon the project. More on this as it develops.

Star Wars: Andor Composer Breaks Down the Music of Kenari