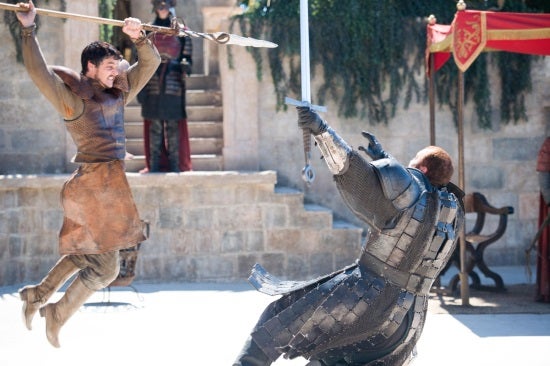 Last night's episode of Game of Thrones, "The Mountain and the Viper," featured a trial-by-combat between Oberyn Martell, played by Pedro Pascal, and Gregor Clegane, played by Hafþór Júlíus Björnsson, to decide the fate of Tyrion Lannister. As per the rules of trial-by-combat, only one man walked away from the fight. We won't say who here, because spoilers, but Pascal has posted a photo to his Instagram feed showing nobody seems to be holding any grudges. The photo shows Pascal and Björnsson hanging out together, with the latter showing off his intimidated size and stature. Pascal posted the photo with the simple status, "Buds." Game of Thrones airs Sunday nights at 9 PM ET on HBO.

Game Of Thrones: The Red Viper And The Mountain Are Buds