John Wick: Chapter 2 takes place a little bit after the events of the first film, as we find John (Keanu Reeves) still trying to pick up the pieces of his life, following his violent takedown of Viggo Tarasov and his son Iosef. Unfortunately, the Russian mob is a big family, and John's actions against them bring on all sorts of vendettas he never expected.

One of those payback moments comes in the form of Santino D'Antonio (Riccardo Scamarcio), an old acquaintance who helped John get out of the game, at the cost of a sacred marker, which obligates John to do whatever he may ask, and not surprisingly, the request involves John completing a suicide mission. Even Mr. Wick succeeds, the deed would put him on the wrong side of the high council that runs his world - same if he were to violate sacred law by not paying back his marker.

With deadly outcomes to either choice, John quickly finds himself a marked man from all sides, with any and every assassin in the city on his tail. However, an entire underworld vs. John Wick may not be enough; "The Boogeyman" is death incarnate, and his patience is wearing thin.

John Wick: Chapter 2 brings back Keanu Reeves and one of the directors of the first film, Chad Stahelski - with co-director David Leitch having moved on to Deadpool 2. There is a noticeable difference in the sequel, with Stahelski bringing a much more raw, and stunt-focused form of action, without some of the smoother cinematic polish and choreography of the first film. That's not to say different is worse: John Wick: Chapter 2 has a lot more fun with the material than the first film did, and the enjoyment translates into the viewing experience.

Stahelski wisely invests in the aspects of the first film that audiences responded to the most: namely, the robust world and mythos that the characters inhabit, and the stylistic (sometimes comedic) over-the-top violent fight sequences. John Wick: Chapter 2 smartly expands on the underworld culture John and Co. live in, offering viewers an international extension that stretches to Rome, as well as more locales in the New York City market. These world-building moments continue to be smartly designed and fun to visit, and keep the film intriguing, even when the bullets aren't flying.

The action sequences in the sequel range from the signature "Gun Fu" choreography of the first film, to a lineup of creative (sometimes brutal) and often funny sequences, each of which is immensely enjoyable in itself, even though they're a bit disjointed as a collective.

John Wick: Chapter 2's main flaw is indeed its fragmented narrative, which was once again scripted by franchise creator Derek Kolstad. The sequel's three acts each feel like the starts to three different story concepts, and no amount of esoteric dialect about "councils" and assassin's law helps to clarify matters. This film is truly a middle chapter of a larger trilogy, and unfortunately, Kolstad uses that context as opportunity to float a lot of ideas without necessarily tying them all off (tasks saved for the inevitable John Wick 3).

For actions fans, the narrative flaws largely won't matter, though: Keanu Reeves still looks great and kicks ass as John Wick, putting himself through even more punishment and physical challenge than the first film. Needless to say, he rises to the occasion.

John Wick: Chapter 2 also benefits from having a much better supporting cast, complete with better villains for John to battle. Common shines as Cassian, another top-tier hitman assigned to protect the person John must kill. Fight scenes between the Rapper/actor and Reeves are brutal and well choreographed, with both men clearly committing to pulling off as many of the stunts as possible. Ruby Rose is a standout without saying a single word, playing Ares, Santino's mute bodyguard/enforcer. Like her castmates, Rose commits to the physical challenge and pulls of some great sequences, adding another notch to her belt as an emerging action star (see also: xXx: Return of Xander Cage and Resident Evil: The Final Chapter). 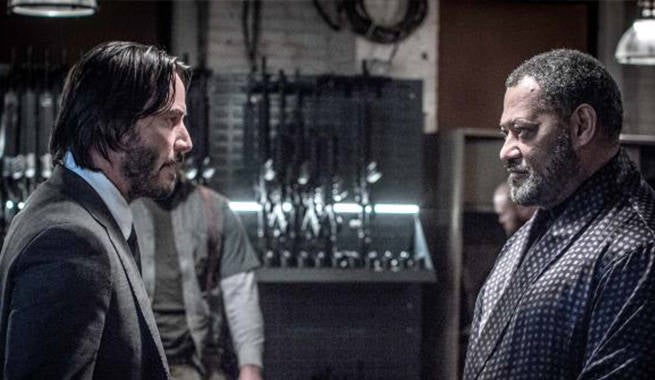 Other great cameos include Lance Riddick returning as Charon, the hotel manager; Ian McShane back as Winston, the hotel owner; and of course, that Matrix reunion between Reeves and Laurence Fishburne, with the latter playing "Bowery King," the man who commands the street vagrant segment of the assassin underworld.

All in all, John Wick: Chapter 2 isn't as narratively simple and streamlined as the first film, but with even more creative and hard-hitting action sequences, few fans will be left complaining. If you liked the first installment, this sequel is not to be missed.

Riverdale Fans Are Not Happy With Katy Keene Cancellation