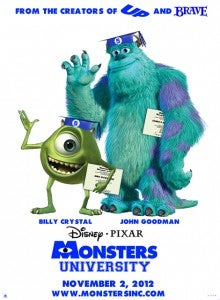 After waiting more than ten years between movies, fans of Disney/Pixar's Monsters, Inc. should be pretty excited to see that today, there are not one, not two, but four trailers for Monsters University, the film's follow-up that brings returning stars Billy Crystal and John Goodman back together. With trailers that debuted exclusively at the Disney website, iTunes, Yahoo! Movies and AOL's Huffington Post, Monsters University has got to have a bigger first-look presence than any Pixar movie yet. "Billy Crystal's an amazing comedic actor," remarked Dan Scanlon, Director, Disney/Pixar's Monsters University, in a press release. "He gave us so much fun material, we decided to cut four slightly different versions of the trailer. We are so happy to have him back as Mike!" Check out the trailers below and let us know: was it worth the wait? Monsters University hits theaters on November 2, 2012.