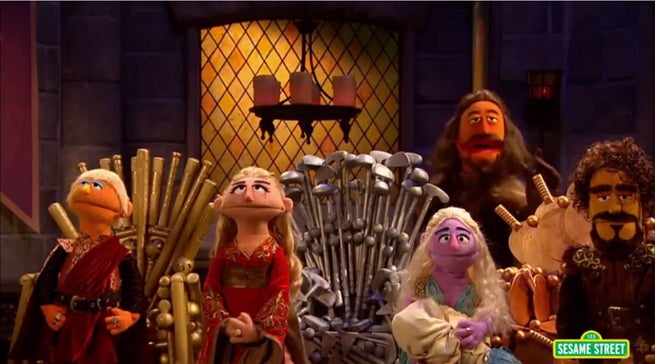 Less than a week away from the Season 5 premiere of Game of Thrones, Sesame Street has released a parody video called "Game of Chairs."

The video sees puppet versions of the major Game of Thrones characters playing a game of musical chairs – these chairs being thrones of melted down golf clubs, whiffle ball bats, and ping pong rackets – to determine who will be the next king, with Grover Bluejoy playing the music.

The video is full of little joking references, like Robb saying he's late for a wedding, Grover telling Ned not to lose his head, and Grover calling Dany the "mommy of dragons.

Check it out below. Game of Thrones Season 5 premieres on HBO April 12.

The Game of Chairs will determine who will be king or queen of Jesteros. Four players will march around three chairs while music plays until one remains. Who will take the crown in this game of musical chairs? Robb, Cersie, Joffrey, Daeneyrus or….?

Dead by Daylight Is Getting Another Resident Evil Chapter

Hunter x Hunter Goes Viral Over Its Creepiest Merch Yet