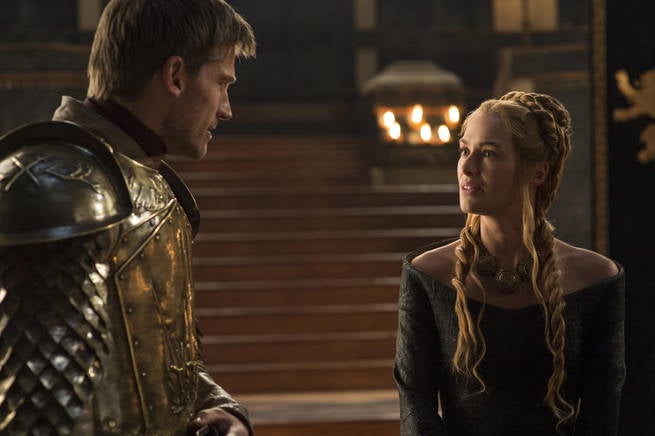 Game of Thrones showrunners David Benioff and D.B. Weiss have confirmed that the series will have the same ending as A Song of Ice and Fire, the book series on which they are based.

Since Game of Thrones first debuted on HBO in 2011, fans who have read George R.R. Martin's original books have had a certain advantage over fans that haven't. Book readers always have some idea of what to expect from the series, while those who only know the television series are forced to live in constant fear of spoilers.

By the Game of Thrones is ready to wrap up, all of that will change. By the time Game of Thrones Season 5 wraps up, every character will have caught up to where Martin left them at the end of A Dance with Dragons, the fifth and latest installment of A Song of Fire and Ice. There's still some hope Martin will complete the sixth book, The Winds of Winter, before Season 6 premieres, as he's been clearing his schedule to focus on the book, by passing on writing a Game of Thrones Season 5 episode and cancelling public appearances, including San Diego Comic-Con. But even if The Winds of Winter does arrive in time, there's almost no chance that the final book, A Dream of Spring, will be released before Game of Thrones Season 7 – which remains the final season, at least in the minds of the show's creators – airs on HBO.

Here's what Benioff had to say about the HBO series outpacing the books, and how that might spoil things for book readers:

Luckily, we've been talking about this with George for a long time, ever since we saw this could happen, and we know where things are heading. And so we'll eventually, basically, meet up at pretty much the same place where George is going; there might be a few deviations along the route, but we're heading towards the same destination. I kind of wish that there were some things we didn't have to spoil, but we're kind of stuck between a rock and a hard place. The show must go on…and that's what we're going to do.

That's the sentiment that Benioff shared when speaking of the implications of spoilers for Martin's future books:

I think the thing that's kind of fun for George is the idea that he can still have surprises for people even once they've watched the show through to the conclusion. There are certain things that are going to happen in the books that are different in the show, and I think people who love the show and want more—want to know more about the characters, want to know more about the different characters who might not have made the cut for the show—will be able to turn to the books.