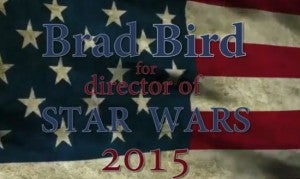 Add Mission: Impossible - Ghost Protocol director Brad Bird to the list of names not taking on Star Wars Episode VII. The longtime Pixar filmmaker tweeted about half an hour ago that he's "not doing Star Wars." "That said, Michael Arndt is a fantastic writer and Kathy Kennedy is a brilliant producer. I will be first in line to see the new Star Wars," he added. "Nnooooooooooooo!!" Tweeted The Walking Dead creator Robert Kirkman, who said earlier today that he had been monitoring all the Star Wars rumors. He spoke for many fans, as Bird had been arguably the name most consistently topping Internet wish lists for the directorship. Some of the most likely to be disappointed are the folks at the Unlearing Channel, who earlier this month released a campaign ad lobbying for Bird to get the job. If that didn't do any good, we'll chalk it up to the Lucasfilm folks being tired of campaign ads already this year. "Thanks," Bird tweeted at a disappointed fan who called him "perfect" for Episode VII. "But the science fiction film I AM doing is gonna be cool." That film, of course, is tentatively titled 1952; written by J.J. Abrams, Disney has high expectations for the film to generate big box office and merchandising--so big, in fact, that for a while there fans were convinced it might actually BE a codename for the in-development Episode VII. At least one familiar name who's pretty happy with this development? Gerry Duggan, co-writer on the newly-relaunched Deadpool for Marvel Comics, who tweeted back, "There's not enough original anything in Hollywood, let alone science fiction."