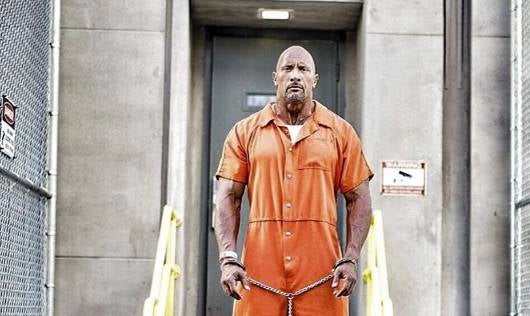 Dwayne "The Rock" Johnson's Luke Hobbs seems to have found himself on the wrong side of the law in Fast & Furious 8.

The character once stood firmly with in alliance with law enforcement and the government but since getting to know Dom and the crew has learned to bend the rules a bit. It looks like the tactics he'll be bringing to the eighth installment, which promises to be a globe trotting adventure, will land Hobbs behind bars.

"I've been in the mix with Chris Morgan, the writer, really dialing in the Hobbs character, which is one of our all-time favorite characters," Fast & Furious 8 producer Hiram Garcia tells ComicBook.com. Garcia, Johnson and Morgan co-created the Hobbs character so it's no surprise Garcia and Johnson are looking forward to bringing him to life again. "Hobbs was one of the first characters we merged together on and when Fast approached [Dwayne Johnson], telling him about the character they wanted to create, [Dwayne Johnson] and I were able to sit down and craft this guy that we would just laugh out loud at the lines we would come up with. When you can say you're gonna put a hurt on someone so bad you'll make their mama wish they kept their legs closed, stuff like that where we can't even finish the line before laughing - that's the fun we love."

The Rock Goes To Jail On Fast & Furious 8 Set