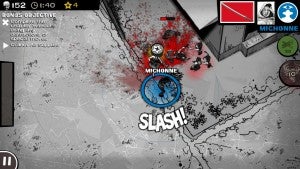 A new version of The Walking Dead: Assault iOS game hits the (virtual) stands today and, among other changes, introduces Michonne as a playable character in the game. The Walking Dead: Assault iOS Game Update Version 1.1 can be downloaded from the iTunes App Store to an iPad, iPhone or iPod Touch and is free to everyone who already purchased the app and only $2.99 for everyone who wants to see what they have been missing. Other improvements in this updated version include a new alternative control scheme so players can double-tap for team movement and hold for a single member move. This option is found in the settings icon on the title screen. There are new indicators on the chapter selection screen to keep track of your progress and show if bonus objectives are completed. There are audio and visual upgrades with audio enhancements for iPad2, iPad 4, iPad mini, iPhone 4S and iPhone 5 to hear a greater variety of zombie sound effects and provide clearer feedback when knocking out a human opponent. There are now new rewards for completing the game on Hard and Brutal difficulty levels, and new achievements for very enthusiastic zombie killers. Despite using color, 3D graphics, the game is actually based on events that take place in the comic book, with art from Charlie Adlard and characters and settings in the game that either don't or don't yet exist in the popular AMC television series. The Walking Dead: Assault features a Universal App allowing a one-time purchase to run on all of the purchaser's Apple mobile devices. The game is optimized for the iPhone 5 retina display and is automatically enhanced for iPad.