Tonight's episode of The Walking Dead stripped away the veneer of suburban normalcy projected by Woodbury and its Governor in rather dramatic fashion. In addition to a peek at the Governor's, err, family, viewers got a look at one of the defining aspects of Woodbury--its residents' rather unpleasant way of keeping themselves entertained. There was, sort of, a hint at the kind of macabre entertainment the citizens might enjoy last week when we saw the Governor golfing, directing his drives at the heads of walkers. Still, this week's reveal of the Woodbury Arena was quite a shock--to anyone who hadn't already read the comics. Of course, fans of Robert Kirkman and Charlie Adlard's The Walking Dead had just been wondering when this darker side of Woodbury would show up--and, only after Glen Mazzara gave up this particular spoiler for certain, here we are. "That's something that I think people can look forward to this season," the producer said in an interview earlier this month. "I'd hope people would think it's an exciting scene. I won't give away who could be in there but it could be anybody." Obviously, now we've seen what he was talking about. Certainly, that was an exciting scene for a while there, but the reveal (made by the Governor himself, no less) that the zombies were toothless took some of the excitement out of the rest of the right. Then again, by that point the "action" portion of the fight was pretty much over and the show was focused on Andrea and the Governor. One thing that's curious: in the context of the show, the Governor and his people seemed to be surprised to learn that Michonne's "pets" lost their will to fight after having their ability to eat removed. If they'd already been doing these gladiator fights with disarmed walkers, that's an odd thing to be so surprised by. If, on the other hand, the Governor had been conducting these battles with "active" walkers up until the point when Michonne came to town, that's another thing entirely. 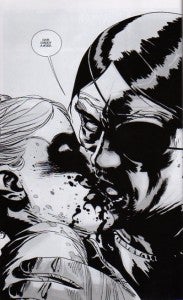 Penny, the Governor's daughter, was also hinted at in an interview last week with Kirkman. "I don't want to reveal too much. But I will say that the opening scene of episode 5 is, uh…It's going to be a pretty memorable one. So be on the look out for that," the writer and executive producer told Entertainment Weekly in an interview after last week's episode. The reveal of Penny was somewhat spoiled by some low-quality international trailer that leaked early in the week, which used footage from the scene in question. And...well, you can't say they do anything lightly in this series. Remember when Michonne's pets were being dissected and the Governor took such interest in the potential to remove their ability to bite, thus keeping them both "alive" and tame?

The Walking Dead: Inside the Governor's Arena