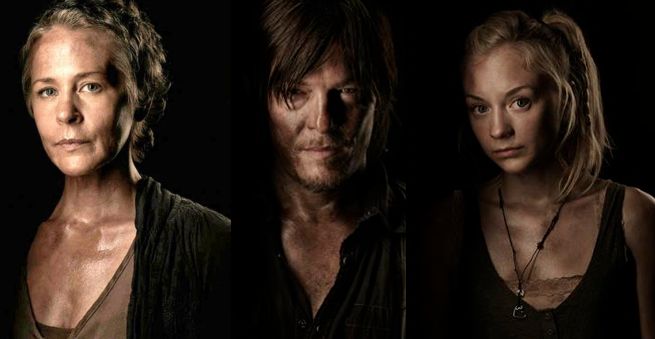 During a roundtable interview at Comic Con International: San Diego, The Walking Dead star Norman Reedus said that he didn't really think Daryl was emotionally ready to prepare with whatever feelings he may have been having for Emily Kinney's Beth during Season Four, while Executive Producer Greg Nicotero told reporters that he wanted to see the two become a couple after watching the footage of the two of them together -- even though that was never the plan in the script.

It all started when we asked how disorienting it was to have everyone on the Internet so invested in his character's love life...

"You know, I wonder how much the writers pay attention to that becuase I of course am inundated with it," Reedus said. "I wonder what the behind-the-scenes brains of the operation..."

"I don't think it really does," interrupted Executive Producer Greg Nicotero. "When they pitched season four and they were talking about the prison goes down and everything and having Daryl and Beth be partnered together...it's interesting, I get to see all the cuts. I see all the edits from the director's cut onward and I loved the scene you did in the kitchen when the two of them are talking and I got the sense that Daryl was starting to fall in love with Beth a little bit."

"Here's where I was when I was doing it: I think that if Daryl had feelings for Beth that he didn't understand them," Reedus explained. "So it wasn't on a level where he....it's almost childlike, 'I don't know what this means,' but it was more intimate than a couple."

"Which is what made it effective," Nicotero said. "When you're listening to her playing the piano and you're just standing there watching it, you feel that it's kind of like that thing where 'This might be the last living person I ever see.' And so I thought that was a really great connection and lot of it wasn't in the script.  The script was not like, 'Okay, so Beth and Daryl are going to totally hook up,' but when I watch the episode, it was like I kind of wanted that -- which was what he brings to it and what Emily brought to it. Then what's great about it is that it all blows up. Sadly in our world, it's whenever you set something up, it's like, 'Hey, look at Hershel. He saved everybody and he got the elderberry root. Aww, man.' All the actors are really nervous becuase if they have a storyline that goes over more than two or three episodes, they're like, 'wait a minute...'."

After a long pause  where Nicotero, Reedus and the reporters at the table sat with all those heavy ideas, Reedus decided to break the tension.

"You realize that will immediately be the headline for all of us, right?" This reporter responded back.