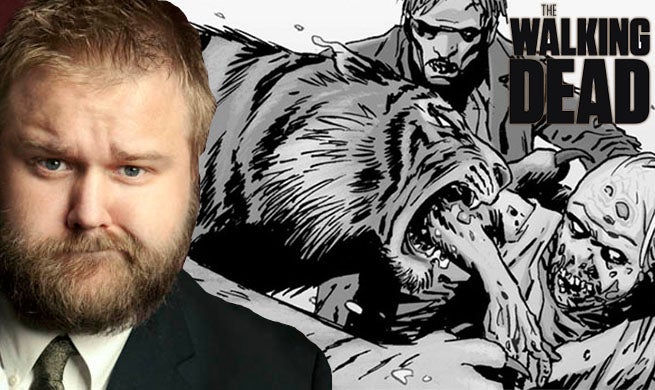 Just when you thought you had seen it all from AMC's hit zombie drama, The Walking Dead, you were dead wrong. If you are familiar with The Walking Dead comic books, you have an idea of things to come. One of those things in particular would really make you scratch your head if someone involved with the show told you the producers will be going through with it.

Down the road in the comics, compared to where the television adaptation is at (in terms of story telling), a character named Ezekiel is introduced. He's the leader of a community called the Kingdom. That's not the difficult part to envision. Here's the kicker: Ezekiel has a pet tiger named Shiva. He has known the tiger since it was born into captivity of a zoo and claims to have saved its life when he didn't tell how it tried to attack him at one point. The two have an uncanny bond, but there's no way AMC could pull off a live-action zomie-eating tiger, right?!

Well, Robert Kirkman, writer and creator of The Walking Dead, believes it is not only possible, but probable! "There's a guy who has a tiger for a pet in the comic named Ezekiel who's really cool," Kirkman started. "I always say that I never let the show influence what I'm doing in the comic. But I will say, when I was writing those characters in the comic, I was like, 'Yeah, good luck doing this, show people!' I think that we'll be able to do the tiger. We'll see."

Kirkman did note that he doesn't think of the television series' realm of possibilities when writing the comics. "It's not something I really think about. I just want to do something cool comic-wise. I'm like, 'It would be awesome if there was a guy that had a pet tiger.' Seeing a tiger eating zombies and stuff. But I think we can do a tiger on the show. Game of Thrones has people fighting bears in arenas, so I think we can do some tiger stuff."

So, Robert Kirkman, the mastermind behind it all who has accomplished some unbelievable feats in comics, television, video games (and soon, movies), thinks that Shiva the tiger can appear on The Walking Dead's television series. If Game of Thrones can do [something similar], why can't The Walking Dead?

For those wondering how long it would be until we could potentially meet Shiva, the tiger, I have the answer (assuming the show continues to follow it's comic book source material). Season 5's second half took place over the course of about 10 issues. The Alexandria Safe-Zone is initially introduced in issue 69 and Peter Anderson is executed in issue 77. Ezekiel and Shiva are introduced in issue 108. At this rate, Ezekiel won't be around until at least season 9 of the television series, assuming (and hoping) it gets that far.

Earlier this week, I wrote a complete run down of what's next for the show according to the comics, so if you're wondering what's in store, I suggest checking that out.

The Walking Dead returns for it's sixth season in October. You can cure your walker withdrawals this summer, though, as the show's companion series Fear The Walking Dead starts its run on AMC, showcasing the earlier events of the outbreak on the west coast.