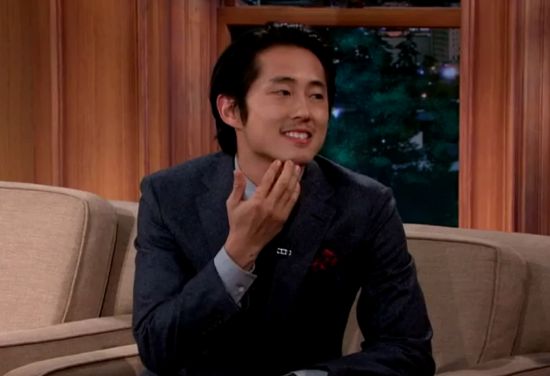 On Friday night's Late, Late Show with Craig Ferguson, Seven Yeun who plays Glenn on The Walking Dead was a guest. Yeun was sporting just a little bit of stubble above his upper lip, which Ferguson was quick to point out. "This is a long time of work. It's like maybe a week or two," said Yeun. When Ferguson revealed that he himself had trouble growing facial hair and that people on his show were outraged when he tried, Yeun revealed, "I tried to grow a mustache on our show, and Denise Huth, our producer, will not let me do it, because she says it's disgusting." Yeun added, "There's some study that men with longer hair and facial hair that they can sense more. That it's another organ that can sense things." However, it's not just Yeun's facial hair that the show provides direction on. When Ferguson pointed out that Yeun's hair was getting long, Yeun said, "I haven't cut it since May. The show, they won't let you cut it."