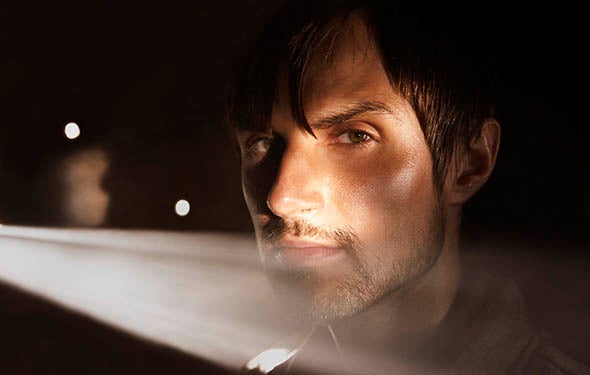 Of course, the producers tried to pretend there was some mystery to it, and from midseason last year all the way until after this year's season premiere aired, there were misdirections, denials and evasions whenever the idea came up. The closest we got to confirmation was soft language like implications that a story that important to the comics was unlikely to be ignored.

Until Monday morning, when in an interview with The Wall Street Journal, Executive Producer Gale Hurd revealed that the sadistic group plaguing Rick Grimes is indeed based on The Hunters. 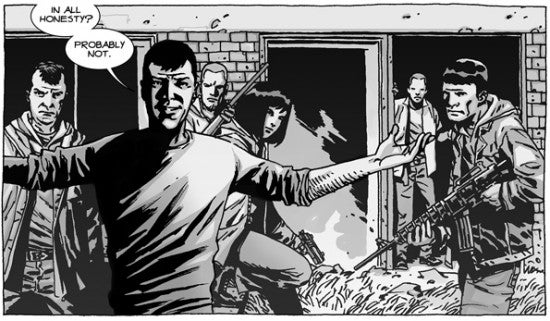 Hurd told the newspaper, "They were inspiration from the comic book. What's interesting about it is that they didn't start that way. It's a traumatized group that essentially adopted a code that said 'You're either the cattle or you're the people who slaughter the cattle. You can't be the middle anymore."

In the comics, The Hunters were a group of survivors that Rick's group encountered while on the road to Washington, D.C. following the fall of the prison. In the comics, the group was traveling together at this point, rather than scattered around as the TV series currently has them--but then again, in the comics both Carol and Tyreese were dead by now, so one of the groups headed for Sanctuary is charting totally new territory from the comics anyway.

The Hunters, led primarily by a man named Chris, consisted of five men and one woman who turned to cannibalism after desperation and hunger led them to kill and eat the children traveling with their own group. Their base was shown to be an isolated countryside home with dense forest and some fences surrounding it.

The group, a roving band of cannibals, were headquartered out of an isolated, rural house in the comics. They would stalk, trap and kill other survivors for their meat, eating them slowly and putting tourniquets on their wounds so that their victims would last longer in a world without refrigeration. 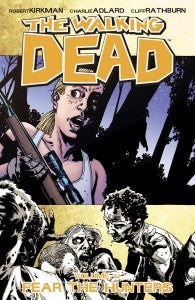 And, yes, not only did they take one of the principal cast, but that character got one of the most memorable deaths in The Walking Dead history out of it. That was Dale Horvath, though, and on the TV show, he's been gone for quite a while. When he died, I vaguely remember producers saying that they had another character in mind who could "take" his death to make it work, but it would be difficult to speculate who that would be, if indeed it happens.

(At the time, I thought it would be Daryl but since then his popularity has exploded to such an extent that it seems implausible to kill him.)

That said, we do have a whole batch of survivors who were either dead at this point in the comics, or didn't exist at all. Carol, Tyreese, Daryl, Tara, Sasha and Beth could all die and not impact future storylines at all, assuming (which of course you can't really do) that the show plans to follow the comics faithfully.

Since Andrea played a significant role in the comics story, it would have to be somewhat reworked regardless.

Again, the comics aren't necessarily a foolproof indicator of future storylines, and some of those characters are not likely to die anytime soon. Nevertheless, having all of those people collected into a pair of groups traveling together seemingly makes one or more of them vulnerable.

There had, in fact, been some speculation that we'd already met The Hunters, after Rick's experience in last season's "Claimed" brought him (literally) face to face with a group of violent, unpleasant men who found their way into the house where he was napping and could have killed him had he not been cleverer than we've seen Rick be in quite some time. Those guys turned out to be the TV equivalent of The Marauders, though, and met the same grisly fate.

Grisly fates were common around this time in the comics.

Since Gareth did not appear fatally wounded during Rick's group's escape from Terminus, since their food supply burned up in the explosive battle, since their numbers were reduced by walkers Carol unleashed on the compound and since Andrew West (who plays Gareth) has been tapped as a series regular this year, it seems likely we'll see the Terminians recur as something closer to the comic book version of The Hunters at some point in the season.

Of course, there's no guarantee. While The Governor's psychosis and his charismatic, persuasive leadership gave a plausible enough reason for why he could persuade dozens of his townsfolk to hurl themselves headlong into danger following his demented quest for revenge in a world so dangerous that revenge seems like a real luxury, doing that too often could seem fairly implausible. While the comics are able to artificially separate such stories because of the monthly, serialized format, stacking them on top of one another in the TV show would stick out more.

Who Are The Hunters On The Walking Dead?