Saban's Go Go Power Rangers #10 came to a close right as two titans were about to come to blows, and now you can get your exclusive first look at round 1 of Pink Ranger vs Ranger Slayer and possibly the key to defeating her.

As you can see in the preview, things kick off with a bank in Go Go Power Rangers #11, as Kimberly attempts to defend Zordon and Alpha 5 from any further punishment courtesy of the Ranger Slayer. Just like she's shown in her first encounter with the Rangers though, this Ranger is well acquainted with the classic team's tactics, and even a slew of arrows from the power bow are no match for her speed and agility.

Let's just say it looks like it's going to be a long night for Kim, and unfortunately, things aren't going so well outside of the Command Center either, as the rest of the Rangers engage the Ranger Slayer's Gravezord. Even commanding it remotely she seems to be knocking the Zords for a loop, but one surprising turn of events might just present a glimmer of hope. At one point Matthew finds himself in the midst of the Zord battle, and though Zack tells him to get out of there he can't before the Gravezord is upon him.

Thing is, Ranger Slayer doesn't smash him with her fist. Instead, she pulls the Zord up close to him and says "Hello there...Matthew." He responds in shock, saying "Um...Hi", but it's what comes next that is more surprising. The Gravezord rises, with Ranger Slayer telling him to "Run! Get clear! Now!" Matthew happily obliges, running away from the battle. 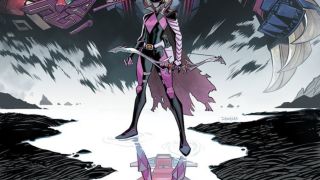 Ranger Slayer has yet to really show any compassion towards the other Rangers (or anyone else for that matter besides Drakkon), so this is definitely a different approach for her. We also don't see Matthew in the other Ranger Slayer flashbacks. So, does this mean something happens to Matthew in her timeline? That would definitely be a reason to spare him here and could end up being a key element in taking her down.

While that is a potential light at the end of the tunnel, things don't stay hopeful, as Jason gets into a heap of trouble as Gravezord runs through his Dinozord. Seriously hope he has insurance.

You can check out the exclusive preview in the gallery.

Saban's Go Go Power Rangers #11 is written by Ryan Parrott and drawn by Dan Mora. The official description can be found below.

"While Matt puts his life on the line to get close to the Rangers, Kimberly must face the Ranger Slayer alone."