The Walking Dead's midseason finale stuck to the script laid out by its comic book source material its final moments of 2016. Spencer challenged Rick's leadership, presenting a new plan to Negan betraying his own leader, and was gutted in front of the entire community as a result.

Spencer actor Austin Nichols had been with The Walking Dead for almost three complete years. His character was introduced in Season 5 when Rick's group marched into Alexandria and shook things up so thoroughly that Spencer's entire family was killed.

In an interview with Entertainment Weekly, Nichols spilled his guts about the fateful days on set, when he learned his character's fate, and more. Check out the highlights on the following slides, each filled with Nichols' perspective on Spencer's final moments. 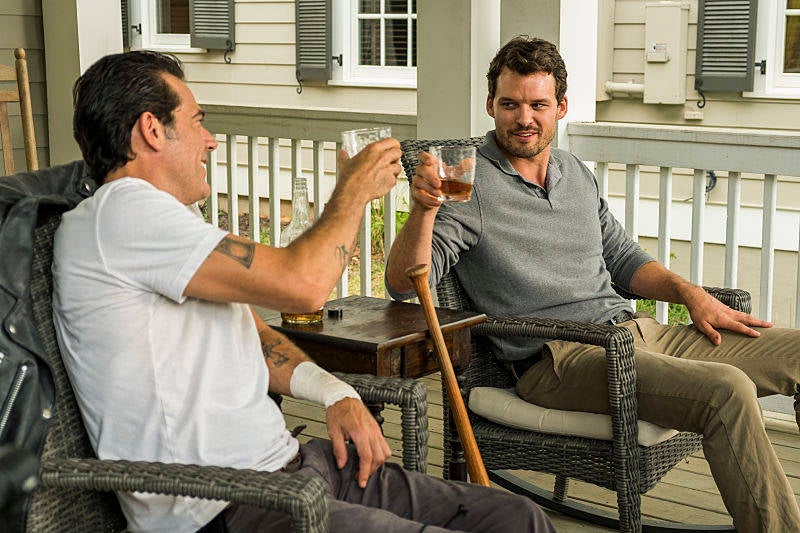 When Did He Find Out?

I had a lot of time. [Showrunner Scott M. Gimple] told me before the season started, in march or April, and we usually start shooting in May. So I knew way far in advance. I’m glad he did, but it maybe made it harder because you had to carry it around for so long and I didn’t really tell anybody.

The Fateful Day On Set

It was probably one of the most fun and most fulfilling time because I got to do two whole days with Jeffrey [Dean Morgan] at the pool table and on the balcony drinking whisky with him. It was just really fun to work with Negan and kind of go toe to toe with him, and then we had this big gag at the end where the guts come out. They had to build this chest-plate. He actually had a real razor blade because he actually had to hit me with it to rip open the blood bag with all the guts and blood. So they had to put a chest-plate on me so he wouldn’t actually cut me, which was horrifying because I was afraid that he would puncture the chest plate and actually cut me — because he comes at me really hard and really fast. He nailed it the first take. We only did one take. It was perfect.

It was cool to do all that effects stuff with the make-up team and do all this fun stuff with the zombie make-up and zombie contacts. I remember at the very end when we had finished all the dying stuff, I just stood up and started screaming.  And I just started yelling “YEAH! That was awesome!” And the crew started clapping for me. It was just really fun. Of course, it’s sad and I’m so sad to leave, but really, I was just really happy. I loved being a part of the show. It was all positive. I just really loved it.

Spencer does say “We’d be much better off” like in the comic, but the distinction is that Negan comes to him and gets in his face and says “You want me to kill Rick and put you in power?” And Spencer starts going, “What? Wait! No!” And he starts backtracking and saying “That’s not what I meant.” And I think that’s super important, that moment, because what Spencer was saying is that “I would like you to remove him from power and I’d like to be the leader here. I think I’d be a much better leader.” I don’t believe Spencer ever wanted him killed in the show. I think that is an important distinction from the comics.

Spencer in the show and Spencer in the comics are a little different and I think the ending there reflects the Spencer that we created on the show. We made him different from the comic book character, and I’m proud of that. I loved Spencer in the comics but I feel like what we did on the show, he was more fleshed out and more complicated and more tangible. I hope I had something to do with that. The writers were really responsible, but I hope that I could take a little bit of credit because I loved playing him. I had a blast.

First and foremost, I am going to miss the people. Everyone on the show is really a joy to be around. I know everyone says that and people probably say that about every show and movie, but this is really a special show and a really cool vibe around it. The other part is that I’ve never been a part of something that connected with so many millions of people and it’s just really cool to talk to people on the streets and see how much people love it. That doesn’t come around that much any more. When we had three networks, it was not that crazy for Dallas to come on and there were be 20, 40, 50 million people watching, but that doesn’t happen anymore. There are so many channels, so many shows. It’s really rare and special to be a part of something that connects with that large of a number.