The Walking Dead's seventh season has been tough on everybody. Those characters who were around for the first moments of Negan's presence on the AMC series had it a little worse, though. They were forced to watch their friends being beaten to death by a baseball bat.

For Aaron, specifically, this was far and beyond the most cruel corner of the zombie apocalypse he had seen. The character has been sheltered at Alexandria from the beginning, serving as a recruiter and living behind walls. Experiencing something so horrific might change a person, quite a bit.

Aaron actor Ross Marquand has quite a bit to say about how much Aaron has been changed from everything in the first half of The Walking Dead's seventh season and he spilled it in an exclusive interview with ComicBook.com.

"I think his optimism and his general belief that everyone is inherently good and can be turned to the good side if given the chance is being severely challenged," Marquand said. "He's realizing that much like the people that he used to work with in western Africa, all those warlords and drug lords that he worked with before the apocalypse began, they're very similar to Negan. There's some people you just can't reason with. I think he realizes there's no way to be diplomatically sound with these people. You have to actually fight fire with fire." 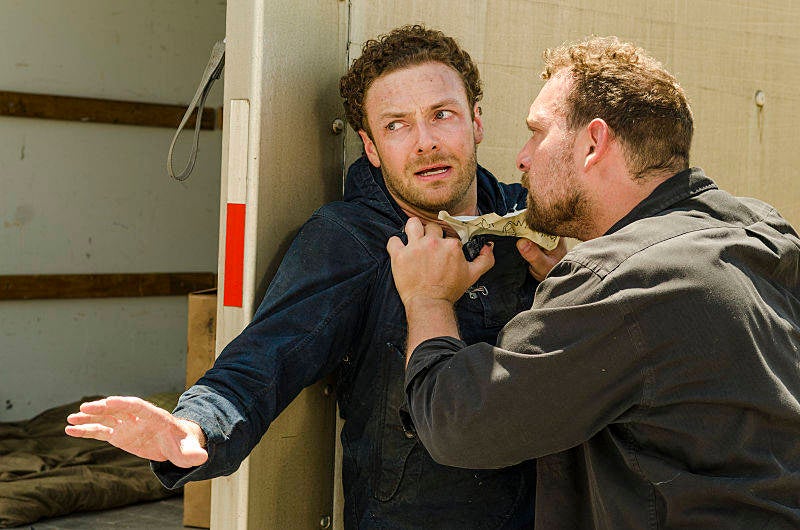 When The Walking Dead returns, Aaron will be on board with Rick's plans to fight the Saviors, despite what anyone else in the community might have to say about it.

"I think at the end of the day, his chief goal has always been the safety and security of Alexandria," Marquand says. "That's why he brought Rick and the group into the community in the first place was because he thought they could help secure the walls and everything and make sure they were strong, solid people inside. So, for him, it's a no brainer. You gotta go and do your best to make sure that it's a sustainable community even after all these horrific things have happened."

It all begins again for Aaron in the midseason 7 premiere of The Walking Dead. It's time to rise up!

How The Whisperers Return on The Walking Dead

The Walking Dead Remixes Major Michonne Reveal From the Comics