However, until now, we never knew where Negan's precious barbed wire wrapped baseball bat got her name. That is officially a thing of the past thanks to issue #4 of Here's Negan. Spoilers follow!

To make such a reveal, we have to start at the beginning. First of all, Here's Negan is a 48-page backstory about The Walking Dead's most infamous villain. It starts out pre-apocalypse, showing us that Negan was a high school gym teacher who wanted to be seen as the cool one by the students. Still, he used harsh language and relentless showmanship to pummel and embarrass the teenagers in ping pong.

Later, it was revealed that Negan was married but also having an affair which his wife was aware of. It was her cancer diagnosis which made him realize it was time to stop messing around and focus his time and affections on her. Still, her life faded and as it slipped away Negan only became more attached to her. 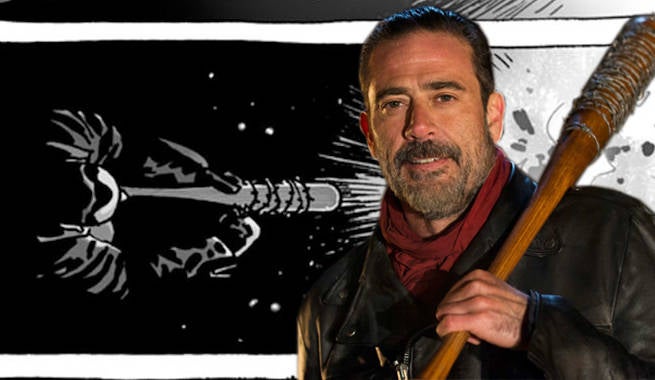 Just as Negan's wife was losing her battle with cancer, the world began to fall apart. People in the hospital urged him to evacuate but he, instead, locked himself in his wife's hospital room and watched out the window as chaos ensued. In those moments, his wife died and reanimated as a zombie.

"Lucille?" Negan called out to his wife, evaluating what was going on and why she was making walker noises, but more importantly to the audience revealing her name to be where his beloved bat got its. What he did next will be seen in next month's 4-page issue of Here's Negan.

The Walking Dead: Here's Where Negan's Lucille Got Her Name