This story is an absolute home run so far.

Over the course of the year and early into the next, Image Comics is releasing a 48-page story telling the rise (or fall) of The Walking Dead's biggest villain: Negan.

Here's Negan has released 3 "issues" so far which are attached to the Image+ preview magazine each month. Totalling 12 pages so far, a quarter of the story has been told and it is both frustrating and heartbreaking. We're going to get into spoilers below, recapping Here's Negan and what it means, so far.

The first four pages revealed Negan to be a high school gym teacher who wanted nothing more than the admiration of those around him. He was tough on his students despite inviting them to his garage for some ping pong practice and used a lot of the foul language we've come to know from him around the teenage boys. After embarrassing one of the young men a bit, his wife arrives at home and gently criticizes his actions before fainting.

The next issue, four more pages, starts out right where part one left off. Negan huddles over his wife and cries out for help. The couple is taken to a hospital where the doctor regretfully informs them Negan's wife has cancer.

The third and most recent installment of Here's Negan starts out with Negan on the edge of another woman's bed deep in thought. After telling this mistress he is upset about his wife's cancer, she kicks him out and tells him not to come back. He leaves and goes to his wife's side, telling him he ended things with the mistress and wants to be with her. She isn't thrilled that it took her diagnosis to help him realize what he wanted. Over the next few panels, Negan's wife's health diminishes until she is drained of energy in a hospital bed but still manages to crack soft jokes with her husband. Throughout the montage, we see Negan caring for his wife, breaking down only to be supported by her, and a genuine plea for her to live on. 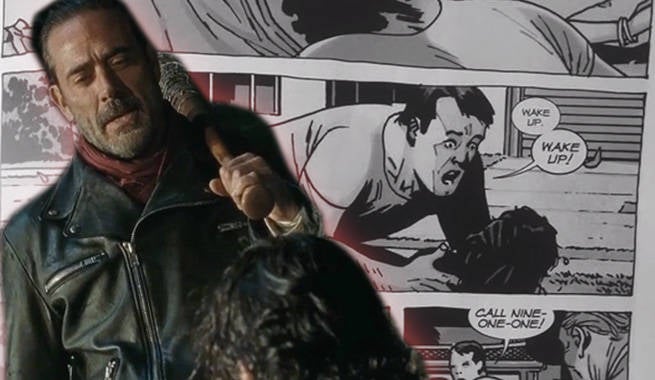 A man rushes into the room and tries to pull Negan out, telling him they have to go and his wife is too sick to be saved but Negan insists he will stay behind with her. The man flees the room in an effort to save himself and Negan looks out the window to see burning cars and chaos. The apocalypse has begun.

While a lot more of Negan's story is left to be told, with nine more four-page issues of Here's Negan in the coming months, we are already getting a peek inside of the villain's head...

First of all, though, how ironic is it that both Negan and Rick will have started their apocalyptic journeys in hospitals? Both under very different circumstances, sure, but the mirroring between the two characters has always existed.

The first issue, in which Negan menacingly trained his students, showed us Negan's thirst for control and approval. Everyone knows bullies are insecure but until now, we never really saw Negan's tactics as anything other than survival methods. In reality, the character was once as human as any of us.

He also made bad choices, as many of us can relate to.

Negan was having an affair which offers him little sympathy from readers, however, there's a lot to be said about the fact he was not hiding it from his wife. No, that does not make cheating acceptable, but the character always has been honest (okay, mostly... He has taken a few things out of context to keep them at his advantage). He isn't manipulative, just brutal and blunt. Clearly, this is a slight indication that Negan acts before thinking things all the way through because when he realized that his wife's life was in jeopardy, he ran back and committed to her once again. Perhaps the same thing would have happened if she had threatened to leave him (and meant it).

His attempts at redemption came in that third installment. Negan was at his wife's side, spending every moment with her possible. He knew what he wanted and dedicated himself to it. Sounds a lot like the Negan who only wishes to survive the apocalypse. He cracked jokes to keep her spirit high and possibly keep his true feelings of panic and sadness hidden, he broke down and needed her to hold him together and eventually showed his true colors as he wished for her to beat the illness and have more time with him.

In the recent issues of The Walking Dead comics, Negan found himself meeting the leader of the menacing Whisperers group, Alpha. Alpha is a bald-headed woman who leads ruthless band of folks who wear the faces of the dead and many readers at first though Negan's instant love for her was because of her style of leadership. With these pages of Here's Negan revealed, is it possible Negan drew on feelings for his wife who lost her hair fighting cancer when he met Alpha?

More importantly, is the Negan seen on these pages still alive, at all? Could The Walking Dead turn into a redemption story for its biggest, most brutal villain to date?

So far, Negan's backstory is both heartbreaking and infuriating. Everyone has (or at least knows someone who has) made choices they wish they could take back. In Negan's case, we want to feel bad for him as he loses his wife, especially with knowledge of the path these horrible moments are going to put him on but it seems he has brought them onto himself to an extent. No, he couldn't have predicted or prevented his wife's cancer but he still blames himself and wishes he acted different, thinking it could have changed things. The character is clearly tormented in his own head and needed saving. Clearly, it isn't coming, and rather than watch the character bounce back in Here's Negan, we will watch him fall into villainous leadership.

As for whether or not we'll ever see this story portrayed on television, we can only hope so, but for now a new trailer for season 7 is arriving next month and it might at least offer clues to who Negan's victim was in the concluding moments of season six.

Fear the Walking Dead Exclusive Clip: A Stranger From PADRE?

Fear the Walking Dead Showrunner on SPOILER's Death: "We Want It to Hurt"