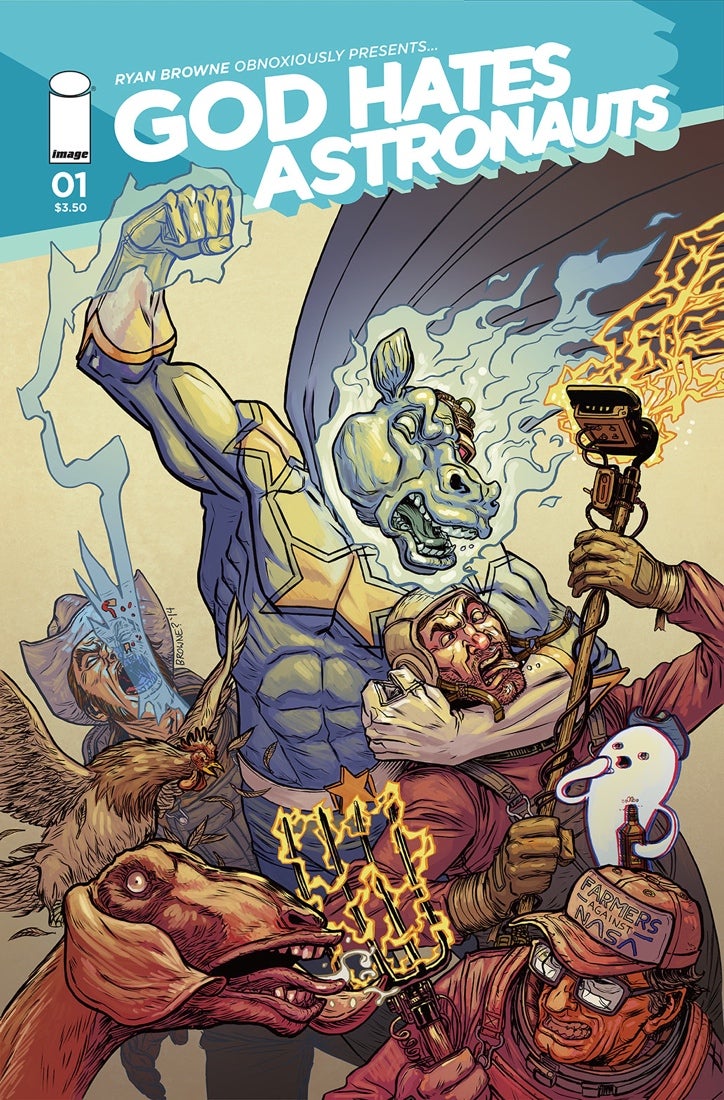 When confronted with something that makes no sense, that is so utterly shocking your brain can not comprehend it, you can either laugh or scream. The choice is between humor and horror. Ryan Browne's God Hates Astronauts will bombard you with images beyond understanding, but you won't have to worry about screaming. It's the funniest comic book you're likely to encounter all year.

God Hates Astronauts is difficult to describe. I closed the issue still chuckling over several different jokes and could have recalled a dozen more instantly. But if I were asked to provide a plot synopsis, then I might be stumped. Things certainly happen, tons of things. There are explosions in space and battles with astro-farmers and intergalactic wars. They all actually coalesce into a single story, but it isn't the driving force behind the comic.

Browne is focused on creating something interesting and new on every page. This is a comic fueled by pure imagination, with new characters and ideas popping up in almost every panel. This creativity is the source of the humor. It shocks you and prevents you from ever being comfortable. It's so ludicrous that you cannot help but to giggle or guffaw at it all. One thing I will guarantee is that however you choose to describe God Hates Astronauts, it will not be as boring.

These flights of fancy work because Browne is an excellent draftsman. When he decides to draw a ghost cow's head with cybernetic attachments perched on top of a superhero's body, you understand exactly what you are looking at. He has an understanding of his craft that may not be clear to some readers because of the innate silliness of the work. This comic is effective not simply because it chooses to present crazy ideas, but because it presents them so well.

Browne commits to his gags too. There is a character called 3-D Cowboy, a ghost with a cowboy hat, who pops up and speaks directly to the reader. He provides a recap and occasionally drops into a panel to simply say hello. He is also 3-D. If you wear a pair of red and blue 3-D glasses he will pop off the page while the rest of the story remains in two dimensions. It's the sort of joke that nudges the reader in the ribs and winks at them simultaneously. The gag is obvious, but tremendously effective. It's having fun and encouraging you to do the same. I'll admit that I ran to my closet to fetch a pair of 3-D glasses with a giant smile on my face because of this comic.

This comic isn't for everyone. It's definitely not for kids - vulgarity abounds. Browne requires readers to give themselves completely over to the bizarre nature and wacky tone of the story. Browne is doing exactly what he wants to do. It's clear that this comic is following the whims of a creator who is creating whatever he thinks will be most pleasing. If you are not willing to accept that a spaceship is captained by a tiger eating a cheeseburger named Admiral Tiger Eating A Cheeseburger just because that is how it is, then this comic is probably not for you.

God Hates Astronauts won't change how you look at comics or view the world around you. It will make you laugh though. It will make you laugh a lot. You may need a change of pants. I don't know, but it's probably a good idea to get an extra pair out before reading it just in case. Pants wetting aside, God Hates Astronauts is one of the hilarious and most fun comics on the stands. If you're just looking to have a good time, then you've found the right book.

Star Trek: Picard Reveals the New Captain of the Enterprise

A Natural 20 in Dungeons & Dragons Wasn't Always a Critical Hit