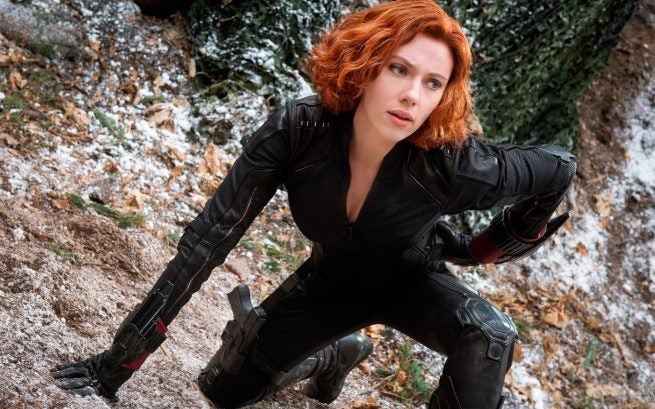 Black Widow looks to be getting a costume upgrade in Avengers: Age of Ultron. Concept art and images show a suit with electric blue, glowing piping, and the addition of stun batons for beating on bad guys. The new look bears some resemblance to Black Widow’s appearance as one of The Mighty in Marvel’s 2011 comic book crossover event, Fear Itself. As you can see in the image above, Widow had a similar Tron-style look going, and was dual-wielding Asgardian swords.

If Widow’s Age of Ultron look is inspired by her look in Fear Itself – and let’s be clear that we’re just noticing a similar style, and do not have any actual knowledge that this is the case – could it also be indicative of a similar origin? Maybe, or maybe not. 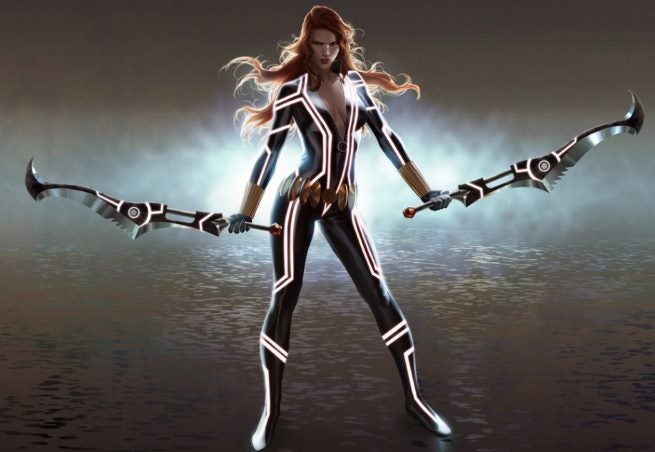 The easy money is on Widow’s new gear coming from Tony Stark, who appears to be bankrolling the Avengers following the fall of S.H.I.E.L.D. in Captain America: The Winter Soldier, and who has some experience creating shiny suits for would-be superheroes without any natural superpowers. Age of Ultron also seems to be highlighting Stark’s hubris, on display during his conversation with Steve Rogers in the wood-chopping scene, and Stark believe he can make Widow a “better” hero by outfitting her with more toys is a great way to show that hubris in action. It also sounds like exactly the kind of thing Rogers would scoff at, perhaps foreshadowing the coming conflict in Captain America: Civil War.

However, there is another theory. Perhaps the similarity between Black Widow’s Age of Ultron and Fear Itself looks is because they’re both of Asgardian origin.

It’s possibly that Widow doesn’t get her upgraded outfit until after Ultron is at large and inside the world’s technology, making it difficult, if not impossible, for Stark to upgrade her tech. Perhaps Thor reaches out to Asgard for aid, and receives some in the form of new tech for Black Widow, among, perhaps, other things.

Of course, Widow’s new gear doesn’t really look like anything we’ve seen from Asgard so far. In Fear Itself, Tony Stark helps forge The Mighty’s arms and armor alongside the dwarf smith Splitlip, so perhaps the unusual design has to do with Stark adding his touch to the suit’s creation.

If you want to go further down this rabbit hole, this could be a sign that Thor: Ragnarok will take some queues from Fear Itself. The comic featured Cul Borson, the long dead brother of Odin, resurrected and trying to supplant Asgard with his own Dark Asgard, under his own rule. In Thor: The Dark World, Loki supplanted Odin as ruler of Asgard, leaving the fate of Odin unknown. If Odin is dead, or even just dethroned, this could perhaps awaken the Cul Borson of the Marvel Cinematic Universe, as he may have a claim to throne ahead of either Loki or Thor.

That’s a lot of if, buts, maybe, and pure speculation, based on some passing similarity between a movie design and comic book design, so make of it what you will. However, there’s a new trailer airing during tonight’s college football championships game, so perhaps we’ll get more insight one or way or another from that. Stay tuned for udpates.

Avengers Age Of Ultron: Is Black Widow's New Costume Based On Her Mighty Gear From Fear Itself?

Shigaraki's Insanity Turns My Hero Academia Into A Horror Movie