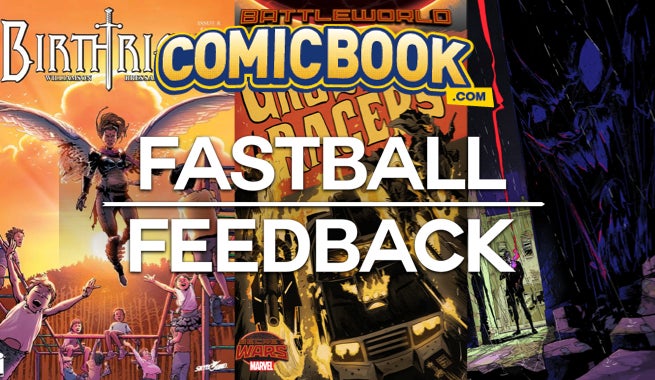 There are several great heroes in popular culture who rely on magic in their crusades against evil. And while Harry Potter is great and all, sometimes its more fun to see how some of the dark arts are applied in the hands of a complete bastard. That's where comic books come in. This week, Marvel and DC launched new series starring some of the meanest magic-users in any realm, while Image Comics continued a twisted tale of perverted fantasies. These comics of “mad magic” are filled with potential, let’s see what they conjured up. 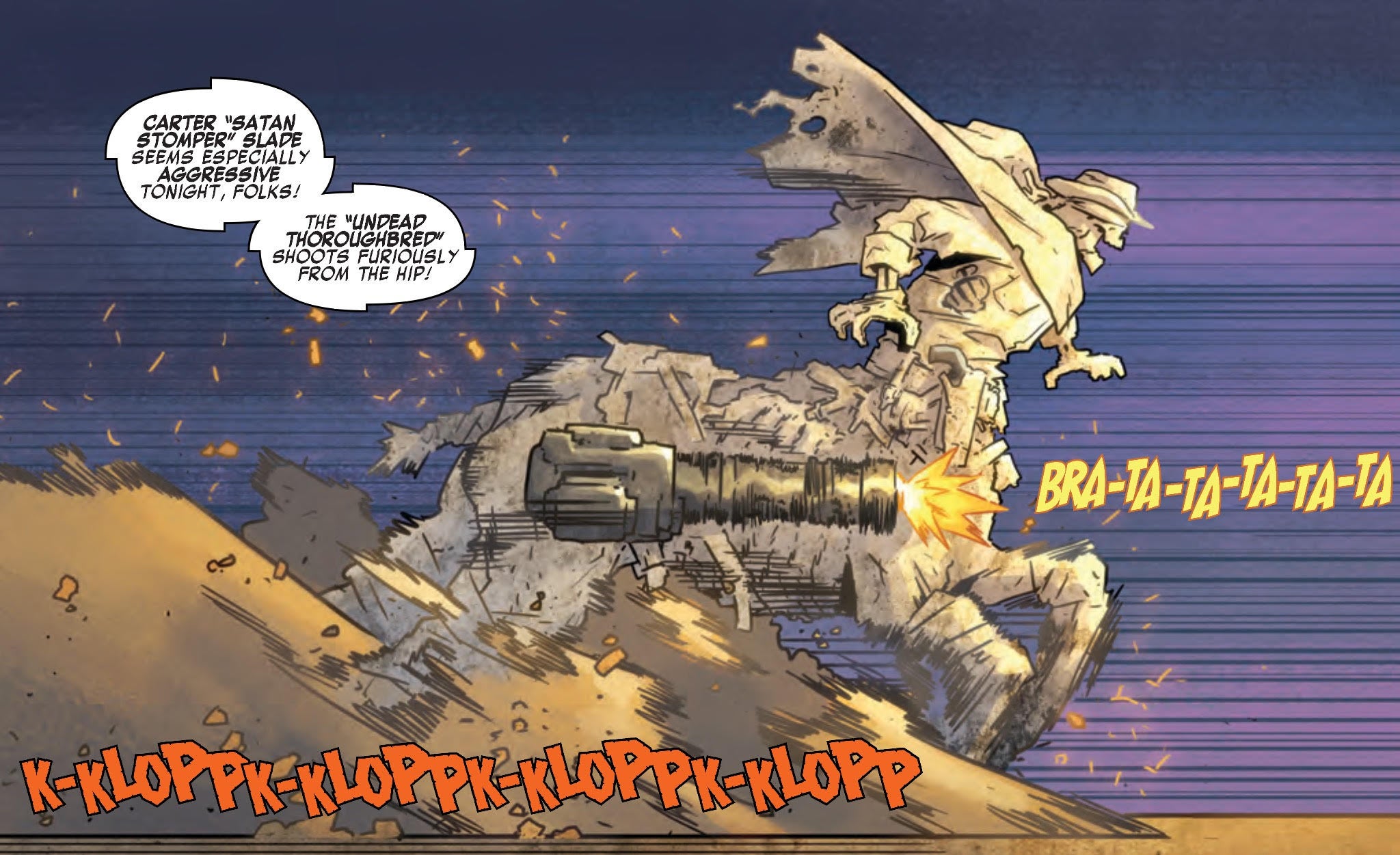 Marvel axed All-New Ghost Rider after only twelve issues, but Felipe Smith is getting a chance to continue Robbie Reyes story as the newest flame-headed speed demon during Secret Wars. Ghost Racers #1 introduces The Killiseum where bloody takes on sports are played for the entertainment of Battleworld. The most popular event is a race between the various Ghost Riders of the Marvel Universe who must win or suffer terrible consequences.

Smith makes Reyes instantly likable for new readers. He’s very talented and has a lot going for him, but never comes off as cocky or uncaring. Robbie is the sort of all-star athlete that inspires real admiration. That, accompanied with his endearing relationship with younger brother Gabe, makes for a hero that’s easy to root for--even if he is lacking in depth. It's just unfortunate that Ghost Racers #1's overwritten direction gets in the characters' way. Every Ghost Racer receives at least one nickname, none of which are appealing on a cool or ironic level. The race scene that composes about half of the issue is covered in text from Arcade who is announcing the race, and slams the breaks on the action. This sort of verbosity is certainly in character, but a little of Arcade’s flavor goes a long way.

Artist Juan Gedeon does make the race sequence thrilling though. Reading it purely on a visual level reveals a great sense of pacing delivered in horizontal momentum. Panels fly by as reader’s eyes are shot from left to right. The only instance in which a panel is taller than it is wide comes appropriately from a wrecked Racer. His designs are also excellent with each Racer standing out clearly from the other burning skulls on the track. Cory Petit enhances these designs with unique speech bubbles for each Racer. Four of the Racers are riffs on familiar Ghost Riders, but Carter Slade is entirely new. The blindfolded centaur with gatling guns looks incredible. While some of Gedeon’s panels don’t appear to be fully rendered, when the action lands, it really lands.

Ghost Racers #1 is another fun spin-off from Secret Wars, providing a unique genre and style amidst the very diverse collection of Battleworld comics. Gedeon is a great fit for the fast-paced action inherent to these characters, and Smith continues to make Reyes a sympathetic, relatable character. The first issue is flawed, but that doesn’t stop it from being an entertaining introduction. 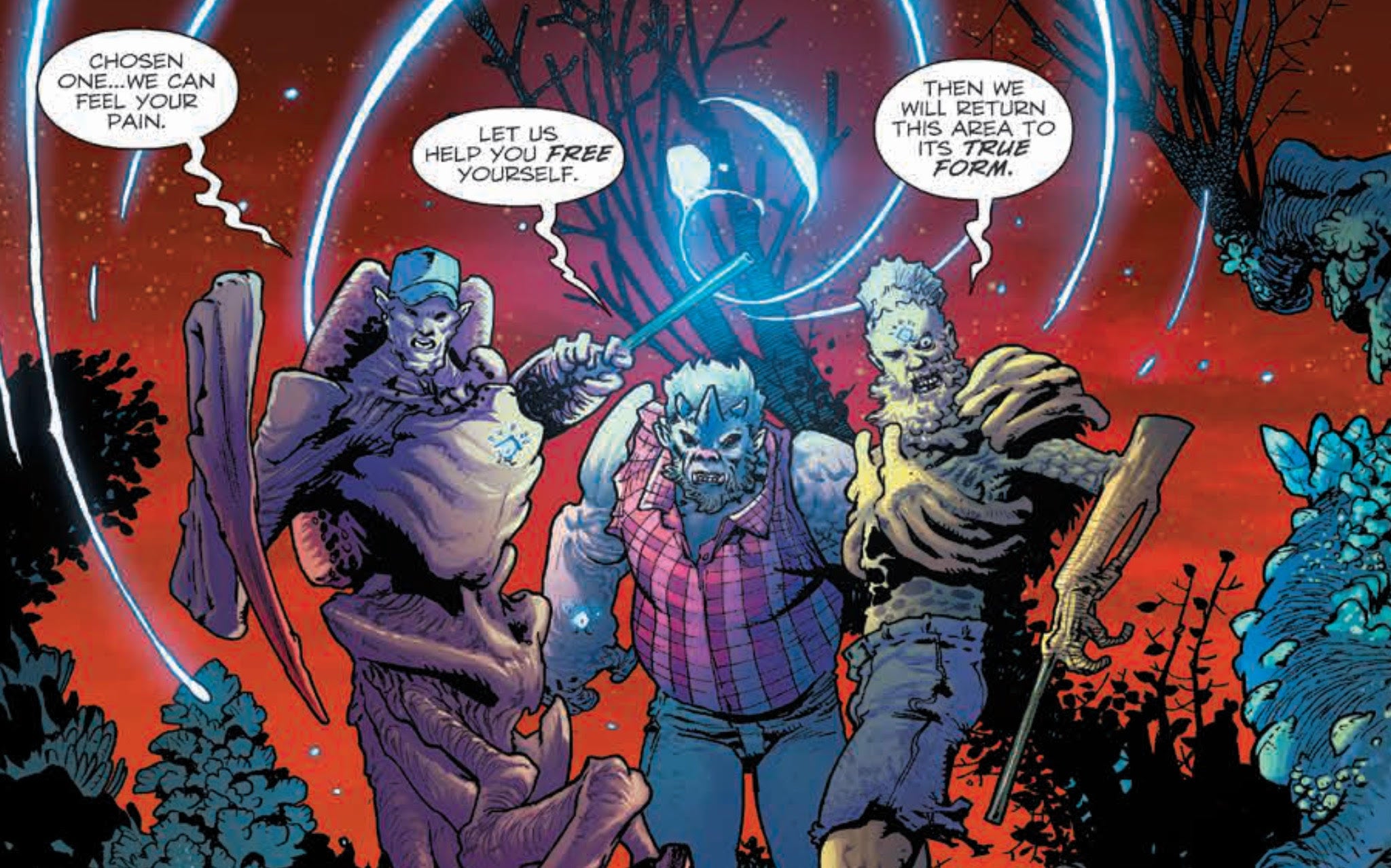 Birthright #8 picks up from a stunning cliffhanger with Mikey’s younger brother Brennan on the ground bleeding from a gunshot. Their quest is sidelined by an attempt to address Brennan’s injury without a hospital, allowing multiple subplots to receive more attention. While this may seem like filler, both writer Joshua Williamson and artist Andrei Bressan take advantage of the distraction to make the world of Birthright feel fuller.

Bressan is given multiple opportunities to show off his wild, fantasy designs here as a “diviner” reshapes the landscape. He juxtaposes the familiar terrain of earth with the brighter, fungus-infused land of Terrenos in a great-looking spread. The flora and fauna of each world is consistent within itself, but make for something very disconcerting when combined. Colorist Adriano Lucas enhances the effect, utilizing a brighter, glowing palette for Terrenos plantlife. Bressan’s best work comes in the form of three morphed hunters from the beginning of the issue though. Each of the newly-created monsters is a unique rendering with only loose references to reality. They don’t have much to do in this issue, but their appearance alone stokes excitement for an inevitable fight scene.

Williamson’s best moments come from the most mundane elements in Birthright though. Interactions between FBI agents hunting something outside of their conception of reality is fascinating. It’s a fun B-plot that could easily have been the focus of the entire series. An interaction between Agent Brooks and a superior make it clear that Williamson is interested in a much wider cast than the Rhodes family alone. Following that expanded scope, the issue is assembled like an episode of an hour-long television drama, touching upon a wide variety of plots where some take exciting new directions and others spin their wheels. It’s pacing and plotting geared for the long-term where comics are read in trade paperbacks. While this strategy is not an inherently bad thing, it does render some scenes listless.

Birthright #8 may read like a middle chapter, but it still has plenty to offer. In its combination of five distinct plotlines, there are both excellent visual and character-based elements. The final page also lands on another thrilling cliffhanger. It’s a fun twist on fantasy that continues to provide plenty of content in every 20 page package.

A naked, blood soaked Englishman stands in the middle of an urban clothing store and convinces the clerk to give him an outfit in exchange for a crumpled piece of paper with "Credit Card" written upon it. Yes, Constantine: The Hellblazer #1 certainly knows how to set the scene. The newest relaunch of John Constantine’s solo series (just over two years after the last) is much more comfortable with the character and his charms than its predecessor.

Artist Riley Rossmo constructs this shadowy corner of the DC Universe perfectly. His style is perfectly in tune with the tense, dangerous atmosphere John is submerged in. Everything you need to know about his quirky (a bit of an understatement) lifestyle flows naturally from the page on a micro and macro level. Details like John’s “credit card” and big elements like a tremendous spread of a retreat based upon Dante’s Inferno make for a truly immersive reading experience. Rossmo breathes life into the character too, drawing small reaction panels that capture an enormous amount of subtext.

Rossmo’s beautiful pencil work is covered by excessive amounts of text on some pages though, bogging the reading experience down. Ming Doyle and James Tynion IV provide an ongoing narration that just could have been communicated just as easily in the art or through small logical assumptions. Remove all of the narration, and the issue reads even better. But, at least Doyle and Tynion have a solid grasp on what makes Constantine work. He’s charming, quick witted, fun, and a generally awful human being. They’ve characterized him as a rake at the gates of hell, and it’s a refreshing return to form. The duo also actively address criticisms of the previous series, distancing John from superheroes and establishing his bisexuality in a charming bit of flirtation. All of this comes across clearly in Rossmo's visual storytelling, which only makes the gratuitous text all the more annoying.

John Constantine is back and in good form. Doyle, Tynion, and Rossmo capture the essence of Alan Moore’s creation and spin him into a perfectly suitable corner of the DC Universe. Constantine: The Hellblazer is mean, funny, and beautiful to behold. It's just too bad that so much of the story is over-told when it is already being shown so well.