The super popular Puella Magi Madoka Magica franchise will be getting its first ever live-action play in Japan, and to celebrate has released a new poster and photos featuring the play's extended cast.

The stage play will be based on the Magia Record: Puella Magi Madoka Magica Gaiden mobile phone game, and is getting ready for a nice September run in Japan with characters that made an excellent jump to live-action.

Running at the TBS Akasaka ACT Theater from August 24 to September 9 in Tokyo, the play features an entirely original story based off of the 2017 phone game. Magia Record: Puella Magi Madoka Magica Gaiden follows a young girl named Iroha Tamaki (played by Memi Kakizaki in the play) is searching for her missing younger sister Ui in the strange city of Kamihama where various magical girls are gathering to do battle. 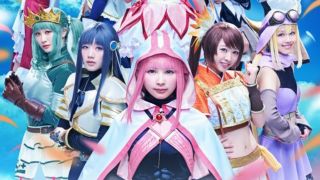 Meeting with Madoka (played by Akari Nibu in the play), main character of the mainline series, as she's searching for a missing Homura, Iroha becomes a magical girl fueled by a wish to rescue her sister from a strange illness. You can check out the full cast roster announced so far along with the play's main poster in the gallery.

Puella Magi Madoka Magica was originally produced as a joint effort between Studio Shaft and Aniplex. Directed by Akiyuki Shinbo and written by Gen Urobuchi, the series follows middle school students named Madoka and Sayaka who happen upon a mysterious creature named Kyubey. It tells them that they can have any wish they want granted in exchange for imbuing them with magical powers meant to fight witches. The series is especially known by fans for twisting common conceptions of the magical girl genre and generally being a dark series contrasting with its art design.