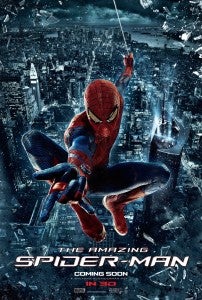 With only a few weeks to go before Marc Webb's The Amazing Spider-Man swings into theaters and moviegoers are treated to Andrew Garfield's apparently much-different take on the character, fans are still wondering whether a reboot so soon after the disastrous Spider-Man 3 was either necessary or wise.

Whether the film can shake off the stink of Spider-Man 3's failure, or live up to the lofty expectations placed on it by fans of the first and second Raimi films, remains to be seen--but one thing is clear: Webb has taken a very different approach to Spider-Man, one more influenced by the tone and tenor of the early days of Peter Parker's career and yet somewhat less slavish to some of that cornball '60s dialogue.

ComicBook.com has been poring over the available footage and can't help but notice that a lot of the changes seem to affect Peter more than they do Spider-Man. What are they? We're glad you asked.

This isn't anything new for comic book fans, but for the millions who only know Spider-Man through the feature films and animated series on TV, Gwen is best remembered as a kind of awkward afterthought tacked onto Spider-Man 3. Mary Jane is, of course, the love of Peter's life and the one he's bound to end up with. Right?

Well, apparently Sony, Marvel, Webb or some combination of the three decided that either they wanted to cast some doubt on that working theory or that  Gwen's story was good enough that it deserved to be told on film. Either way, we're looking forward to seeing how the relationship between the two develops and whether, with Emma Stone being praised in early reviews as a highlight of the movie, they can find it in themselves to really crush the spirits of the viewers in a future installment of the franchise.

Again, this is something that was already tweaked a bit when Sam Raimi introduced the genetically-altered spider in his Ultimate Spider-Man-inspired version of Peter's origin. Still, it's worth noting that even with a lot of the stuff in this movie that seems to be coming straight out of the comics, his origin isn't one of those things. Is there a reason behind it? Is it part of a larger master plan for sequels, or to tie in with the Venom movie?

Maybe--more likely it's just about making the science somewhat more believable. Back in the '60s, "radiation" was used to explain away a lot of peculiar things, from The Incredible Hulk to Godzilla. Nowadays, people have a little more sense for what radiation actually does, and means, and so it's somewhat of a harder sell.

It might be a sign of the times, but Peter's uber-nerdiness is apparently not enough to make him a social outcast in the Webb interpretation of the Spidey mythos. Instead, he's a kind of emo-skater-nerd mashup with a wacky haircut who you can pretty easily see being a target of derision more than just "that kid who studies all the time."

Let's face it--just being smart isn't enough to put a target on you anymore, in most schools. Now, there are kids who are part of outcast or mocked groups, there are kids who are part of minority groups or who engage in unpopular activities...you don't want it to deteriorate to Glee, where someone is bullied just because the script asks for it. You have to make it work.

On the upside, the whole kind of baggy clothes, always with a tote bag thing he's got going on also makes it a lot more believable that he could be always dressed to web-sling in this movie and that nobody much would notice his red-and-blue tights under his clothes. A clean-cut kid in a white dress shirt probably couldn't really pull that off.

This one's a biggie for both Peter and Spider-Man. With signs that his parents' disappearance has something to do with Oscorp, Dr. Curt Connors or perhaps even Norman Osborn (will we ever see him in this movie?), Peter's long history as a stringer for the Daily Bugle comes to an end and he seems to be depicted only as an intern for Oscorp in this movie. It fits his scientific skillset better than the photojournalist angle does, and synchs up nicely with the version of Peter that was last seen before One More Day, when he finally put his science skills to work as a teacher.

It also lines up nicely in terms of why he might actually be the first line of defense against threats that originate with Oscorp, which seems likely to serve as a proving ground for villains present and future.

A younger Aunt May

For as long as we can remember and in nearly every iteration of the story, Spider-Man's beloved Aunt May was a dessicated old woman who could keel over at any moment. This time around, we get Sally Field, who may not be at her Norma Rae fighting weight but certainly won't pass for "ancient" anytime soon. Martin Sheen's Uncle Ben is a bit older, but Sheen is a spry fellow who manages to imbue all of his character with a sense of vitality and energy.

Why would they be doing that? Our best guess is that it has to do with Peter's parents. In the Sam Raimi films (and the early comics), he was living with a kindly, elderly couple--essentially, Aunt May and Uncle Ben were Marvel's version of Jonathan and Martha Kent, right down to the tragic loss of the adoptive father figure. The ages of Peter's parents, who were dead at the start of the story, were not really considered becuase it was largely irrelevant.

The same can be said for the Sam Raimi Spider-films, but not this time around. It's clear that not only do we see Peter's parents and have a pretty good sense of their (not-so-advanced) age but that they may actually pop up in a sequel, given the fact that much of the early promotion revolves around their disappearance and Peter's own "untold story." Perhaps a younger Aunt May is just to bring her more in line with the ages of his parents, since there are only so many years you can have between siblings, or even siblings-in-law, before it starts to strain credibility.