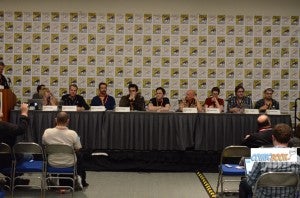 This evening at the San Diego Comic-Con International, Chris Roberson and Allison Baker's Monkeybrain Comics had their first-ever Comic-Con panel, featuring not only that duo of Co-Publishers but also Chris Schweitzer, Joe Keatinge, Ken Garry, Paul Tobin, Colleen Coover, D.J. Kirkbride and Brandon Seifert. Beginning the panel by handing out pieces of chocolate to the crowd and moderated by Bill Willingham, the panel was attended by a small but raucous and incredibly supportive crowd.

For fans who didn't follow the Monkeybrain launch, Willingham said he had one question: "Why?"

Chris Roberson said, "I like reading comics and I like making comics and I wanted to find ways of doing both of those things. Digital was a great way of doing that without losing my shirt or my house, or having to sell my child."

"We trended on Twitter, which was kind of unexpected," said Baker of the company's launch, which happened July 2 via ComiXology.

There are, indeed, talks about doing print editions eventually, "but this was a way of doing digital comics that people could buy now and they could enjoy and the profits would go to the people who made them," said Roberson.

"One of the cool things about working in digital rather than print is that anyone who's ever produced a comic of their own knows it can take months to get to paper, get it published and sold," said Colleen Coover, the artist on Bandette. She said that the first issue of Bandette, her title with Paul Tobin, came out less than a week after it was finished and that a page projected on the screen at the panel was actually drawn on Tuesday of this week. She and Tobin agreed that the series was going for as many issues as they want, with no particular end date in sight.

Willingham joked that he couldn't grasp a publishing company that didn't "kick things upstairs" to be messed with, and that Roberson must be kicked out of publishing right now. "I am a very poor publisher, yes," Roberson admitted.

"We don't ask people to pitch books," Roberson said. "We like your work--do what you want, and we'll publish it. So many creators are like abused spouses and they can't get past it, and so I keep getting these proposals."

Wander is a new title being offered by Monkeybrain Comics; it will be written by Kevin Church and drawn by Grace Allison, who colored Roberson's Memorial. The first issue goes on sale next week, and it's about a woman from our world who ends up in a magical fantasy world.

"We had church with Kevin Church in New York last year and he told me this idea. It was like, 'I want to read that book,' and we started a company so that we could make that happen.

"I don't want to say that these are artisnal," Roberson joked, but there's no set release schedule, meaning that the comics at Monkeybrain will be released as they're ready to be published.

Masks and Mobsters is written by Joshua Williamson, who joined the panel late, and drawn by Mike Henderson.

The series will follow the mobsters who seemed to vanish in the Golden Age of superheroes. "It's mostly an anthology with each issue taking place in a different city with different mobsters," said Williamson of the issue which will be on sale July 24.

Intergalactic will be written by Joe Keating with art by Ken Garing. "Not that long ago I was revising this obsession I had as a kid about astronauts," said Keatinge, who said it eventually turned into an idea for a comic. Becuase he couldn't figure out how to make it work as a traditional print comic, he knew immediately when Monkeybrain was announced that he could do it through them. The title follows a family dynasty of astronauts who exist in a world where the world economy is built around the space program.

Garing said that his take on Intergalactic was born out of a lack of hard science fiction in comics, and that he wished there was more in the marketplace. His book, Planetoid, launched as a digital title before GraphicLy stopped distributing comics to mobile devices and recently moved to Image Comics, with its second issue hitting on Wednesday.

Chris Schweitzer and Audrey Morris' Konqueror will launch soon as well. "All of the cartoons I loved during the eighties had all of these nerd universes that would spring up" to justify a toy, he explained, and so every character in the series could be an '80s toy. He calls it "Spartacus on Eternia, but with a lot more politics." The central character intends to free humans in a world where they're enslaved, but only to destabilize the status quo so that he can take over the world. Schweitzer says that he's giving Morris a lot of leeway in the scripts because, essentially, she's cooler than he is. The series will run once a week for twelve weeks, likely launching in October.

Schweitzer will also be doing a Western anthology, a weekly title called Roundup, featuring a rotating cast of cartoonists edited by Schweitzer with contributors like Matt Kindt and Scott Chandler. There will also be a new Latigo story from an unpublished strip. Stories in the series will also be written by established writers along with students from Schweitzer's Western comics class at Savannah College of Art and Design in Atlanta.

Seifert's new title is also an anthology title, with all of the stories in Dream Sequencer being stories he's written by a variety of artists. All of the stories will be one-shot, self-contained stories with little else connecting them. They will be between sixteen and twenty-two pages and will begin publishing with a story that he describes as "a superhero origin story from the villain's point-of-view."

"Becuase I do Witch Doctor, I'm already being associated as being a supernatural or horror kind of guy," said Seifert, but he loves a number of other genres. "So this is my opportunity to do whatever I want to do without anybody having to clear it."

The final announcement was Awesome Adventures by Roberson and Thomas Perkins IV, an artist new to comics based on a family of superheroes called The Awesomes who travel through the multiverse having crazy adventures. The series still hasn't begun, so Roberson will release it when he gets it done.

Roberson says there are around 30 projects in various stages of development at Monkeybrain, most of which won't be announced until they're ready to be bought on ComiXology.

"Because there is no expense related to making these, there's no upper limit to how many we can do," Roberson explained to an audience member who asked.

According to Roberson, the print rights remain with the creators of the books, who also retain copyrights and get 90% of revenue generated by the books. He says that their marketing plan is not to the exclusion of print, but that serialized single issues are a money-loser for most creators.

"We're marketing these things like you would sell an app on the iPhone," said Roberson, saying that solicitations in comics are a phenomenon of the direct market and not a necessary part of marketing comics.

"There is no alternate universe where you can get five comics for six bucks," explained Coover when asked by a fan what the appeal is of digital-only comics that don't serve the collectors' market.

Schweitzer pointed out that while the direct market may make collectibility work for big-name, franchise titles, it doesn't serve the needs of smaller creators.

The length of the standard comic, Roberson explained to a fan, was actually a creatively arbitrary length and so the fact that the company has gone digital means there's nothing to say a creator can't just publish a shorter or longer comic under Monkeybrain.