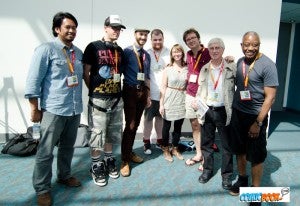 presented a "Serious Pictures: Comics and Journalism in a New Era" panel earlier this afternoon at San Diego Comic-Con International. Featuring Ted Rall, Chris Butcher, Dan Carino, Ed Piskor, Stan Mack, Andy Warner, Susie Cagle and Calvin Reid. They discussed graphic novel publishing principally in the bookstore market, but of course necessarily touched down on the direct market, as anything at Comic-Con tends to do.

Reid talked about comics-as-journalism--something practiced by many of the panelists--as "a new way to get information to people faster, easily comprehensible, and also to take advantage of digital distribution." He told the audience that comics journalism "makes a complex narrative easier to understand."

"I came to this whole thing from journalism--journalism with words," said Cagle, who graduated from Columbia School of Journalism in 2006 and struggled through lean years working for start-ups before deciding to go for illustrated journalism. "I tried to do graphic journalism in the form of minicomics for a while and I found that I've been much more successful in the form of my work and making it sustainable getting paid when I approached it with the same formula I was approaching freelance journalism, pitching individual stories," she said.

Cagle said that while she is currently working on a book, she's not particularly optimistic about the book market. She says it's probably an easier sell to get news junkies to respect and approach comics than to get comics fans to embrace this kind of work.

Warner said that he wrote his book, The Man Who Built Beirut, after being discouraged by the lack of change there six years after the revolution that was kicked off following the assassination of the former prime minister in a car bomb.

"I didn't know what this was until really today, heairng all the different ways that people play with tools that I've been using for a very long time," said longtime Village Voice cartoonist Stan Mack, author of graphic novels for young people that deal with U.S. history.

"There was a mini-Occupy Movement in around 1990 that some of you may remember," Mack said. He says that he hung out with the demonstrators, and that while he was sympathetic to their cause, he tried to stay as unbiased in the way he looked at the situation as he could. That turned into a lot of research about property and housing rights, which ultimately morphed into his historical graphic novels.

"There were only two things I knew about when I started to do work like this, that had any influence on me--one was Maus and the other was Calvin [Reid]," Mack said.

"Unless you're on the front line doing breaking news stuff, we tend to see the human side of politics," Mack said. "So [my work] was a picture of what was going around the people behind the explosions."

"I'm a little uncomfortable with the term 'journalism' being attached to my work because I've never thought in those terms at all," Piskor said. he said that comics is simply the medium he loves and the one he chooses to tell the stories that interest him. Following Wizzywig, his portrait of hacking culture, he's currently working on a graphic history of rap music.

"Traditionally, I'm a political cartoonist limited to the single-panel format," explained Carino. "I started reading the works of Mat Bors, Susie [Cagle] and Ted [Rall], and that seemed like a lot more fun than what I was doing with a single panel." He works on a multimedia comic that has elements of motion comics and animation to it.

Rall, who was a columnist sent to write about the U.S. invasion of Afghanistan in 2001, returned home and wrote a graphic novel about his experience called To Afghanistan and Back about the traumatic experience. "I just thought the distraction would just get it out and excorcize it," Rall explained, and after a tight deadline the half-prose, half-comics book became the first book ever published about the Afghan invasion.

"Like Scott McCloud says, simple drawing styles tend to allow people to project their own thoughts and feelings into a frame," said Rall, who describes his own art style as "primitive." He's heading up to Toronto to cover protests there next week.

"I can't claim to be an objective person--I think no journalist really is--but when I go into this I take off my editorial cartooning hat and I'm open to learning things I did not know or to changing my mind."

Cagle says that while the journalism market is terrible right now, some see graphic journalism as a way to bring in a different audience than what's already out there.

"I'm just looking at it as, 'how do I make money? How do I get to do this?', and this is where I see the opportunity to do it," said Cagle.

Warner thinks that the easy visual grab of comics works even better on the Internet and so comics are more likely in the modern press than they even were before to interact with them.

While Cagle says she feels comics present a great opportunity to do breaking news, Warner says that he's always had trouble with that, because it's harder to contextualize than something you can put in a historical context.

"Web stuff is really ephemeral," Warner said. "That's also the same amount of effort that you put into it; web stuff has to be shorter because there's less returns."

"Becuase there is a lot of gray area in a lot of the historical facts" about some figures, said Piskor, "the only way to make it accurate was to make it slightly fictionalized." He added that the only way that Wizzywig made sense was if it was slightly fictionalized. He added that he likes the idea of the Internet as a proving ground for his work, where he can put a draft and then make some corrections and changes before the final, printed product.

"Whatever the format--wherever this stuff is going to appear--there has to be a depth to the work," said Mack. "It's not just catching the bird on the wing but it's what you have to say about it that's important. In my own case, maybe it's age but I switched from catching that bird on the wing endlessly for so long." He says that while he could probably still manage short-form, daily or weekly material, he would rather work in the longer form he's currently doing.

"The idea of reporting as opposed to a columnist who has more of a unique thing to say or an opinionated thing to say," Mack said, "is that it's the story that counts. Sometimes you might piss off a person with whom you might agree because of what you said but I have a feeling that the longer view is much more important than that one person's opinion."