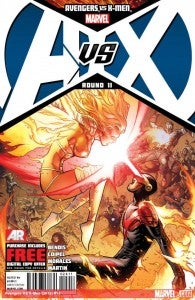 The New York Daily News has the exclusive this morning, folks--and of course, everyone was right.

We'll give some room for spoilers here by explaining what we mean by that. Ever since Brian Michael Bendis told ComicBook.com in a June interview that Avengers vs. X-Men #11, out today, would feature a story that would force him off the Internet for a while to avoid the ire of fans, we wondered what it could be. As the issue neared, and solicitation text revealed a fatality, many fans and critics thought they had a pretty good idea of who it might be--a suspicion that's been confirmed by one of Marvel's favorite methods--taking it to the mainstream press the morning before fans get a chance to read the comic.

Speaking about his then-upcoming issues of the massive crossover event, Bendis told us, "So eight and eleven are the next ones coming out and both are pretty gigantic chapters. Eleven in particular is one where I’m going to have to unplug the Internet for a while and not be part of the conversation…cause it’s gonna get loud! I don’t know if it’s going to be Hawkeye bad, but something happens where I would…yeah."

And today it's been revealed that it's Charles Xavier who dies in Avengers vs. X-Men #11, at the hands of the Phoenix-possessed Cyclops. And Bendis has a take on that, too.

“He was this thing that was just floating around the X-books, with not the same amount of gravitas that he once had,” Bendis told the Daily News. “I did point out that he would matter more in death.”

It's been widely speculated that Xavier would be the series' sacrificial lamb; not only has he not been seen in any of the Marvel NOW! solicitations, but his son is taking over a title called X-Men Legacy, his school appears to be in the hands of The Avengers and most of the other really good candidates for AvX fatalities have appeared in some book or another.

“I got a little teary-eyed when we were scoping out the moment in the room with the series’ writers and editors,” Marvel Editor in Chief Axel Alonso told the newspaper.

“He needed to be the casualty in this story. There’s no more oh-sh-- moment that you can bring than having a son killing his father.”

That moment, of course, is somewhat muted for some fans. Within moments of posting this link to our Facebook page, the first comment came back from a reader who asked matter-of-factly, "Oh please, how many times has this character died already?"

For that reason and so many others, it's hard not to imagine that this death is only as "real" as the Ed Brubaker-penned Death of Captain America story, which saw Steve Rogers return to life (and the role of Cap) just in time for Captain America: The First Avenger to hit theaters. Charles Xavier, as played by James McAvoy, will next appear on the big screen in 2014's X-Men: Days of Future Past, a sequel to X-Men: First Class.

But Marvel executive editor Tom Brevoort rebuts that in the article, promising readers, “This is about as serious and lasting a death as you’re apt to get in one of these.”

And of course the increased synergy between Marvel's film franchises and their comics can cut both ways. It may actually serve the comics to have the character alive in the films, because even if he's left a martyr, he's still alive someplace where fans can enjoy him and make favorable comparisons. This used to be true of the Ultimate Comics universe, too--that the simplified, new reader-friendly nature of that universe meant you could find your favorite dead-and-gone characters still kicking around in those pages...but now that they've had years of their own history, deaths, rebirths and reboots, most fans just think of it as an alternate universe and don't see those characters as "the same" as their 616 counterparts.

In spite of having crossed his moral event horizon in the biggest possible way, it seems as though Cyclops won't die for his sins (which readers knew if they've been paying attention the Marvel NOW! teasers).

“The moment is shocking, and certainly will be talked about by message boards forever and ever, but it’s really about what you get afterwards,” Bendis said. “What Cyclops has to do now, is dig himself out of the biggest, deepest hole in the history of comic books.”

Despite the Marvel AR logo in the bottom right corner of the image at left, it doesn't yet reveal anything beyond the image itself if you plug it into the Marvel AR app for iOS.