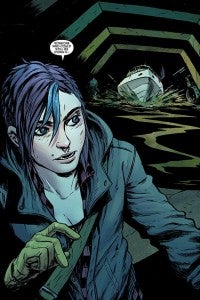 During a new interview in promotion of Batman: The Zero Year, Batman writer Scott Snyder told MTV Geek that while Harper Row may be suiting up to help Batman out in future issues of Detective Comics, it's far from a foregone conclusion that she'll eventually become Robin.

"I'm not going to give away what happens…whether she would BE Robin or not," Snyder said, stressing that a key aspect of the character is that she's being established in her own right, rather than as a stand-in for Damian.

The article, by former DC editor Valerie Gallaher, points out that some of the fan backlash against the Stephanie Brown's time as Robin was born out of the fact that it seemed so self-evidently like a gimmick that was never going to have the staying power of a Tim Drake, or even Jason Todd.

"I feel badly that everybody is assuming that just because she's there right afterwards, we were trying to position her as the new Robin. But I can tell you honestly, everybody reading this…she's not designed to be Robin," Snyder said in the interview. "What the creation of Harper Row was really about was creating a lens for me personally that I could relate to in Gotham, that would be like, a kid, or somebody struggling, as a young person, you're trying to make ends meet, you're in this place that's really tough, nobody believes in you and you have this incredible superhero in town that's doing these things that inspire you."

Batman Writer Snyder: Harper Row "Not Designed to Be Robin"