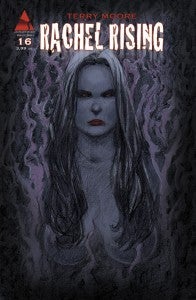 The latest issue of Rachel Rising, Terry Moore's acclaimed and Eisner-nominated horror comic, hit the stands on Wednesday and featured, for the first time, the central characters getting together with no one in immediate danger of being killed to figure out what kind of menace they're facing and what to do about it.

Meanwhile, of course, in the time since the last issue was released Terry Moore has signed a TV deal with Alcon with the intent of sending the story to the small screen.

Moore joined us for his regular commentary track-style interview to discuss the TV deal, the sudden speculator boom happening around the title (currently, copies of the first issue are selling for between $30 and $100 on eBay, in spite of being less than two years old and being widely available for cover price just a month ago) and, of course, the actual comic.

Since these interviews are spoiler-intensive, we remind you that you really should read the issue before continuing. Why not go buy a copy and read along with us for Moore's insight?

ComicBook.com: So, Terry - this is the first "commentary track" interview we've done since the big announcement. I'm sure you've seen that Rachel Rising is suddenly an eBay phenomenon. How's it feel to be in the thick of the speculator market?

Terry Moore: It has nothing to do with me, so I don't feel it. I still sell the books for $3.99. I'm glad people think they're worth it.

ComicBook.com: If the show does go to series, do you think that would have an impact on the comics? You've talked about wanting to move on from the darker material and do something more light and fun, but obviously on a smaller book if there's money to be made it's hard to say no.

Moore: I would hope the comic would benefit from a tv show, maybe attract new readers. But, you're right. If the show gets on air and the comic finally finds an audience, that would be a terrible time to kill it. I've always wanted a comic series that sold at popular levels. I've never been in the Diamond Top 200, much less Top 100. I would like to get that before I give up.

ComicBook.com: Do you think that TV and film deals, if they start to actually make it to production, could be really good news for smaller guys? I mean, I know guys who publish books through Image and Archaia who sell a couple thousand copies but suddenly they've got Hollywood at their door. Stuff like Rachel Rising and The 6th Gun are suddenly the subject of scrutiny.

Moore: I think the immediate danger is known cartoonists leaving comics to work in other media that's more financially rewarding. Whether it works out for them or not, they often go and some never really return to comics. I mean, who can blame them, but it's our loss. I don't want my favorite cartoonist to go draw beautiful movie storyboards I'll never see. But in terms of young cartoonists who get a film deal… they're a multi-media generation anyway, so it seems kind of natural. They can do this or that. A book, a website, a YouTube video, an indy movie… it's all the same playground for them.

ComicBook.com: And--hey! There was a comic this week!

This is the first time that all of our "good guys" have been in a room together, and alive, in a while, isn't it?

Moore: Yes. It was time to regroup and compare notes. It can't all be one long snake chase.

ComicBook.com: I think one of the things I love most about Manson is the way people just seem to accept what's going on and roll with it. You've got Carol now who's just kinda hanging out in the background helping nurse all the dead people.

Moore: Carol's cool. We'll see a bit more about her and where she's coming from in the next issue. And, thinking of Carol and Johnny, I have a surprise for any SiP fans out there in issue 17.

ComicBook.com: Johnny, in spite of having been pretty open to what was going on in the beginning, seems to have grown a bit skeptical. Is this a change in her mentality or are we just seeing a different side of her now that shes back in action?

Moore: Since her devastating accident, we're seeing the professional side of Johnny, the scientist who wants real answers. She's very smart, and none of this adds up for her.

ComicBook.com: I can't quite tell whether the little argument they get into is totally facetious or not. Are Jet and Rachel a bit on edge with each other?

Moore: Rachel has an edge to her, no doubt. She says things I wouldn't dare say. But Rachel grew up with Jet so they have the ability to be blunt with each other. And, every word out of Jet's mouth now tells the story of what happened to her since the accident.

ComicBook.com: That is one...profoundly disturbed...priest. There are a half-dozen reasons why the idea of a priest might strike fear into Jet in her current condition, but is it a safe bet he's in the top three?

Moore: Okay, you do realize that is the priest Malus went into when he left Jet, right? That should explain the recent events with Zoe.

ComicBook.com: It's interesting that Lilith's followers aren't all on the ball. Is that just a matter of them having to come in and reincarnate into a new person if someone's killed, or is it more that some of them are either regular humans, or people like Rachel with incomplete memories?

Moore: It has to do with who they were to begin with, and how strong a witch they are… or aren't. You know, after 300 years you might be a little rusty.

ComicBook.com: Were there words carved into the bone of Jack's knife? It looked a bit like "Mary" on the hilt to me.

Moore: Jack inscribed the name of his last victim—Mary Jane—onto the handle of his knife. If you know anything about the implied history of this knife, you'll know what that's about.

Rachel Rising's Terry Moore on the TV Deal, the Speculator Market and #16