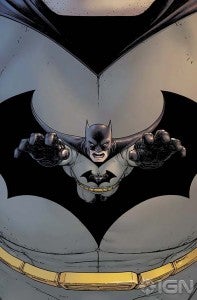 Grant Morrison, who will wrap his Batman run with Batman Incorporated #13 in July, spent the first chunk of that time (from around 2006 until late 2011) doing his best to reconcile every stitch of continuity and oddball story beat from the first seventy or so years of Batman's publishing history.

Then, of course, the New 52 came along and rebooted the DC Universe. While Batman and Green Lantern were nominally left alone so that Morrison and Geoff Johns could finish their years-long, fan-favorite runs on the titles, the worlds around them changed and the timelines contracted in such a way that much of what worked before the launch of the New 52 became a continuity headache after it--most notably Damian Wayne, Batman's son and the boy who was Robin for much of Morrison's time on the comics. He was ostensibly conceived after Bruce Wayne was Batman--and already had a version of the costume--but that doesn't sync with the timelines given for Batman's first appearance or his training in the New 52. Most fans were able to process the information and ignore the contradictions, but comic book fans do love their continuity, and some readers couldn't get past it.

So what does Morrison himself think? He's characteristically zen about the whole thing.

"It’s not so much of a strain because the work stands and it will always stand, and fortunately for me, it connects to every year of Batman, so even when people pick up a 1940s collection they might be reminded of something in the story that I’ve just finished, so I don’t mind that," the veteran writer told Maxim. "And honestly, although it feels like having the carpet pulled out from under you when the universe changes, at the same time it has to do that, you know? I’ve been on the book for quite a long time and I think it’s very important for new people to come in and tell the story from a different angle, and to revamp it and revitalize it for a different generation of readers. So yeah, it obviously feels weird to have my version of Batman contradicted, but I think it’s essential, and it has to happen."