Twenty years after he first stormed into comic book stores, Dark Horse Comics have declared March 21 to be Hellboy Day, and will be supporting in-store events for retailers around the country, including a signing appearance by Hellboy creator Mike Mignola in West Hollywood.

After the character’s beginnings as an eight-page feature in Dark Horse’s San Diego Comic Con Comics special, Hellboy: Seed of Destruction #1, released in March 1994, would begin the long life of one of the most beloved creator-owned characters in comics.

Dark Horse issued a statement today saying that they are "inviting [their] retail partners to celebrate with us, by offering up exclusive promotional materials, as well as ordering discounts on all Hellboy and BPRD backlist titles." 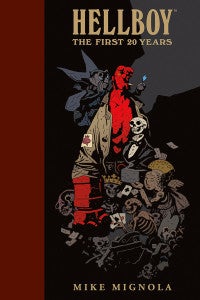 The publisher will also produce an all-new sampler comic featuring two classic Mignola tales--“The Ghoul” and “Another Day at The Office”--as well as two new stories by Mignola, Fabio Moon, and R. Sikoryak!

The Mignola appearance on March 22 will be at West Hollywood's Meltdown Comics and Collectibles, with more details on that event expected soon.

Dark Horse Comics encourages fans to tell their retailers that they want the store to participate in the event, and for retailers to watch for details on participation levels and promotional support in the March-dated issue of Previews.

Additionally, Dark Horse is offering a 20 Years of Hellboy hardcover collection, on sale in comic shops on March 19. The deluxe, oversized hardcover presents Mignola's favorite covers and illustrations in gallery style, from his first drawing of the character through twenty years of publishing.

Drew McIntyre Talks Breaking Out of the WWE Raw Midcard, Plans for After WrestleMania 36