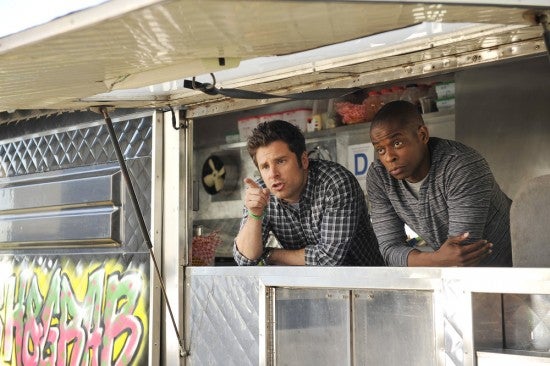 The episode opens with the scene teased last week, where Shawn and Gus discover that Mauricio from the Macho Taco food truck has been murdered. He's their favorite food truck proprietor, and Lassiter -- who hates food trucks -- has brought them in to advise...in no small part because all of the food truck proprietors have been ticketed by Lassie in the past and hate him.

He's also too stressed out by his pregnant wife and the mayor's being a pain in the neck to fight the urge to hire them.

Marlowe shows up, and admits that they're not that prepared for the baby to come. 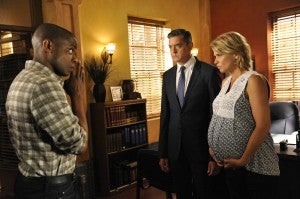 Back at the scene of the crime, Shawn and Gus drive up in a food truck that Lassiter had provided them (it had been impounded and never recovered) and, after a comically inept parking job during which they run over Mauricio's makeshift memorial.

Shawn tells Gus while they're setting up that the food truck could be their destiny. After they get their first customer, Shawn notices that there's a Mexican restaurant you can see from the food truck.

The owner, Harold, had problems with Mauricio, according to the other food truck owners.

They meet up with Lassiter, who is carrying around a practice baby from his birthing class, which he's been forced to join after Gus pointed out how unprepared they were for the baby coming.

At the Mexican restaurant, Harold has an alibi: he was in small claims court all day, suing Mauricio for stealing his secret recipe.

The pair head back to the area around the food trucks, where they're giving out free samples of deep-fried food in the hopes of talking to some customers who might have had problems with Mauricio. Instead, they're accosted by the owner of a gym who is passionate about the food trucks leaving his customers alone.

When the two return, there's been a surprise visit from the Health Inspector, who gives them a D-grade and 2 days to get up to snuff.

They go to Henry for help getting the truck up to code, and he says he doesn't have time for them today. When pressed, he admits he's showing the house to potential buyers. When Shawn asks why he's selling now, he just says it's time.

The pair of them go park the truck in a prime location so they can get some clues when the square opens up the next morning, and when they start to walk away from it in the dark, a man with a gun comes up behind them and tells them not to move.

At first Shawn thinks it might be a clue but then it turns out he's just sticking them up for money. He insults their food before leaving when they admit they have none. 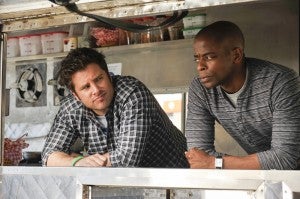 The next morning, the other food truck owners tell him that you have to pay protection so as not to get robbed. They find out that the gangster in question is named Smokey; they go to the house of the only known Smokey in the area but when his mother answers the door and goes looking for him, he darts away. When they catch up with him, they figure out he's a college kid who was pretending to be with a gang in order to extort money. They also figure out that the health inspector had a fight with Mauricio the day before he was killed. While he's doing the follow-up inspection at Shawn and Gus's truck, though, Shawn gets a call from Henry saying that he's sold the house and Shawn needs to come get his stuff from his childhood bedroom.

They drive the truck to the house, where Henry is having a yard sale. Gus starts looking around, finding all the things Shawn has stolen from him over the years.

Meanwhile, Shawn sees that Henry has bags from Handles, the gym across the street. He assumes that the parking problems caused by the food trucks drove him to first sabotage the Macho Taco with the health inspector and then to kill Mauricio. When they go to the gym to accuse the man, though, he's dead, his windpipe broken under a barbell.

Lassiter meets the duo at the square, where he figures out that there's probably a connection between the food trucks and a series of bank robberies of banks in the area; what better way to case a bank than to park a truck outside of it for eight hours a day?

McNabb tells Shawn and Gus that he prefers their food to the Mexican fusion that the truck used to serve, and Shawn realizes they may have been driving the killer's truck around the whole time.

WHen they go to talk to him, though, he admits that he was just a bad businessman and failed because he didn't know what he was doing. It happens all the time, he tells them, and rattles off a number of examples--including a Vegan food truck that's still in business. "He must have come into some money," says the truck's old owner.

They call Lassiter and ask to meet him at the busienss park; Marlowe shows up looking for food truck food against doctor's orders. They hide her in the truck since Lassiter is coming. Then they and Lassiter go to question the Vegan truck owner, but he throws a buch fo supplies at them, backs into Lassiter's car and then speeds off. Before they can figure out how to follow him, Henry -- who showed up to talk to Shawn but ended up hiding Marlowe -- calls them in to say Marlowe's water broke.

Henry tries to walk Lassiter through delivering the baby while Gus starts driving the truck toward the hospital. When he does a poor job of backing out, though, Lassiter takes over.

On the way, Henry starts trying to talk to Shawn again but Shawn dismisses him on account of everything going on. Henry tells him that since his near-death experience last year, he's been thinking about the need to try something new in his life. It turns out the Lassiter is the one who bought the house. Shawn and Henry start to have a serious talk, but then the baby is coming. Just as they arrive at the hospital, the baby is born and Shawn hands it over to Lassie.

Back at Henry's house, Shawn reveals that the Vegan food truck got all the way to Arizona before the police caught up with him. Shawn, jumping on the bed in an act of defiance because Henry never let him as a kid, crashes into the wall and breaks it, then runs out through the window over the porch roof.

Back at the police station, Shawn and Gus come to see Lassie and comapny, and bring his newborn a toy from his old room, so that the little girl can grow up with a toy from the room she will be raised in. Before they leave, though, Gus steals it back, saying it's his.

Psych Recap With Spoilers: Shawn and Gus Truck Things Up