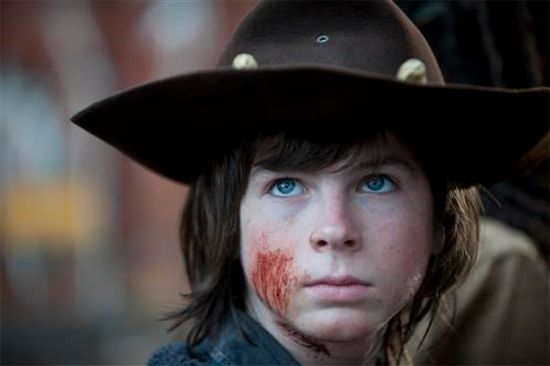 For the first time ever, Andrew Lincoln will be appearing on the Talking Dead this upcoming Sunday. However, there was someone else that wanted to be on this week’s Talking Dead, but AMC apparently said, “No.”

On Sunday, Chandler Riggs, who plays Carl Grimes, tweeted at Chris Hardwick, “Nerdist you should have me on next week!” Or course, Riggs many fans thought this was a great idea, and they started tweeting their support.

For his part, Hardwick responded, “YOU CAN COME ON WHENEVER YOU LIKE, SIR! #OpenInvitation.”

However, it looks like Hardwick might have spoken too soon. Earlier today, Riggs tweeted, “AMC says NO TALKING DEAD for me-thanks everyone for your support & requests!  @nerdist #ClosedInvitation.”

Chandler Riggs not being allowed on Talking Dead is leading to much speculation as to why. Could it be that something so shocking happens on the Season 4 Finale that AMC didn’t feel it was appropriate to have a child actor on to discuss? Or it is simply that AMC already has the guests planned out and mixing things up this late in the game could cause headaches?

AMC says NO TALKING DEAD for me-thanks everyone for your support & requests! @nerdist #ClosedInvitation

The Walking Dead’s Chandler Riggs Told "No" For Talking Dead

Batwoman Has "A Very Un-Birthday Present" in New Preview

Here's How Batwoman's World Has Changed Post-Crisis on Infinite Earths

Batwoman Recap With Spoilers: Kate Lives Her Truth in "How Queer Everything Is Today!"

Batwoman Hints That Batman Begins Happened in the Arrowverse