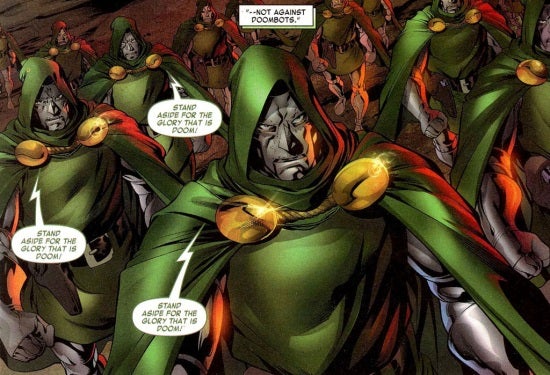 The Fantastic Four rebot will feature Doombots, according to a report from Nerdist. “Reliable sources” say that “Doombots will definitely be in the film.”

Doombots are the robotic Doctor Doom lookalikes that the Latverian ruler uses as telekinetically controlled minions to do his bidding.

This news comes just after the announcement Toby Kebbell has been cast as Doctor Doom in the Fantastic Four reboot. He joins a cast that already includes Miles Teller as Mr. Fantastic, Kata Mara as the Invisible Woman, Michael B. Jordan as the Human Torch, and Jamie Bell as The Thing.

Doombots could be a nice addition to the Fantastic Four. Providing Marvel’s First Family with plenty of disposable, cannon fodder henchman to cut loose on, with no regrets or moral ambiguity, could facilitate some impressive action sequences.

Rumors are circulating that production on Fantastic Four has been delayed because of a disagreement between Fox and director Josh Trank, but the studio has denied those rumors. Fantastic Four #1, by Stan Lee and Jack Kirby, is the comic book that launched the modern Marvel Comics universe as we know it.

Fantastic Four is a reboot of the Marvel property centered on four astronauts who gain superpowers after cosmic radiation exposure.

Fantastic Four is currently scheduled for release on June 19, 2015.

Disney Pokes Fun at Self With New Simpsons Compilation

The Vampire Diaries' Paul Wesley to Direct Episode of Batwoman