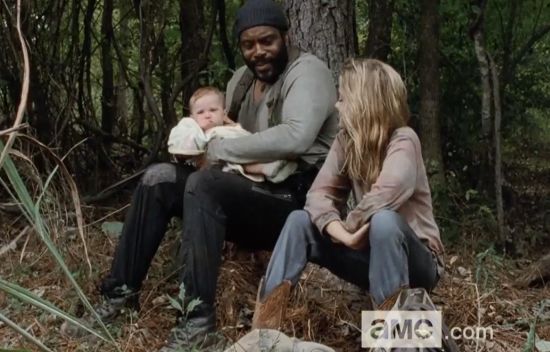 The first of the two scenes is from the season's fourteenth episode, titled "The Grove." It features Tyreese, Carol and the two girls they were traveling with...and it not only teases Tyreese's comic book past (he references a football stadium, and in the comics was a football player before the zombie apocalypse) but also explains a question that bothered a lot of fans: Why did Carol and Tyreese suddenly start carrying the baby around in a backpack with no explanation?

The second scene, from the season finale (titled "A"), follows up on a scene from near the beginning of the episode (seeing the man in need of assistance, when Carl tried to run to his aid but Rick said not to) and connects to a later scene in which Carl told Michonne that Rick had called him a good man.

In both cases, the scenes are pretty strong and have some narrative importance, at least relative to most deleted scenes you find on DVDs, but the episodes in question were fairly packed and it's likely they were cut primarily for time.

The Walking Dead's fourth season arrives on Blu-ray and DVD, with deleted scenes, documentaries, commentaries and other special features not available on the streaming services where you could already own the series, on Tuesday. The fifth season will release on AMC in October.