Archie Comics has provided ComicBook.com with an exclusive look at the art of Betty & Veronica #2 from Jamie L. Rotante with art by Sandra Lanz, Kelly Fitzpatrick, and Jack Morelli on sale January 30.

Betty & Veronica is the new miniseries that follows the iconic titular ladies as they embark on their senior year of high school complete with all of the challenges and uncertainties that entails. For both Betty and Veronica, these situations are made all the more intense given their own complicated personal lives, but as the series explores, they have each other in spite of it all. That friendship is something that Rotante told ComicBook.com is important to showcase, especially given the characters' long history in Archie Comics.

"For almost 75 years we've seen these two characters fighting over Archie, yet they remain best of friends," Rotante says. "Why not showcase that friendship instead of the feud? Growing up reading Archie I always gravitated toward the stories that had the girls going on adventures together as opposed to them being bitter enemies, and I know a lot of other young women feel the same way, and now is as good a time as any to center on that."

That's not to say that the friendship won't have its challenges. As readers saw in Betty & Veronica #1, both Betty and Veronica have their own secrets. Betty is struggling with her family's financial situation as well as her heart after breaking up with Reggie while Veronica is dealing with not getting into the elite college her parents wanted her to. As you can see in the art from the upcoming second issue -- which you can check out in our gallery below -- those secrets will create tension for Betty and Veronica. According to Rotante, it's secrets and the breakdown of communication that will be at issue for everyone involved. 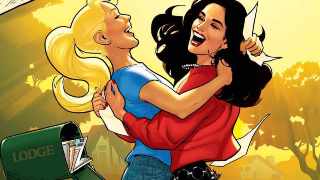 "Those secrets will be an ongoing theme throughout the series, but more than that it will be a breakdown of communication that causes the most tension -- and not just between Betty and Veronica, but among a few of the characters," Rotante explains. "It's about what happens when things aren't outright said, instead left up to speculation, and the problems that can cause."

And while the girls are definitely front and center in this story, you can expect the boys to have important roles as well.

"Both Archie and Reggie will play a pretty large part of this story," and we'll see newer and different sides of them than we have before," Rotante says. "Their relationship respectively with Betty and Veronica will also be key -- it wouldn't be high school without at least a little bit of dating drama!"

Are you excited to see where Betty and Veronica's adventure goes in Betty & Veronica #2? Be sure to check out the art in our gallery as well as the solicitation for the issue below. Betty & Veronica #2 will go on sale Wednesday, January 30.

BRAND NEW SERIES! "Senior Year, Pt. 2: Fall" – The girls are under stress from their parents and peers—Veronica's parents want her to attend their alma mater; Betty's parents are stressing out over the cost of college. Betty and Veronica start to grow apart because of their new hobbies and interests, but they know that one thing will bring them together: Riverdale's Halloween party.