All Divinity and Myshka want to do save their son, but it will be a long hard road to make it happen.

Valiant Entertainment has given ComicBook.com an exclusive first look at Eternity #3, which follows Abram Adams and Myshka into the infinite realm as they search for the whereabouts of their son. For all his power Divinity would rather just have a conversation, but it doesn't look like the denizens of this place will allow for that.

As you can see in the preview (located in the gallery), those denizens aren't ones to underestimate, going toe to toe with Divinity before claiming the upper hand. Things aren't going so well for the two would be rescuers, but it looks like they might be getting some help from an unexpected place. 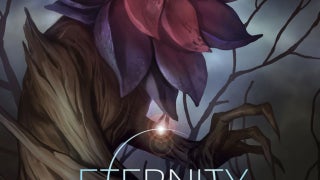 In fact, Eternity is all about the unknown and forcing Divinity out of his comfort zone.

"It’s been fun to throw [Divinity] into a universe – the “Unknown” that gave him his powers – and populate it with a world full of like-powered characters," Kindt told Paste. "He’s not going to be in control anymore. If you’re imagining that this might lead to some kind of insane cosmic fist-fight through dimensions and realities and possibilities, you would be right!"

You can view the new preview in the gallery, and the official solicitation can be found below.:

"In a realm beyond the limits of human perception, a group of impossibly powerful beings laid claim to a human child… Now, to save their son, Abram Adams – the god-like being known as Divinity – and his comrade turned lover, Myshka must finally reconcile their humanity with the unreal abilities conferred upon them…and journey into the source of their power… Where they will bear witness to the truth of their purpose…and their role in the cosmic reckoning that is to come…"

Exclusive: The Search for the Son of Divinity Continues in 'Eternity' #3

Attack on Titan to Add New Pages to Final Chapter