When Peter Cannon: Thunderbolt comes back to comics in 2019, superstar writer Kieron Gillen will be at the helm.

Along with artist Caspar Wijngaard, Gillen returns to superhero comics with a story about the former Charlton Comics character, the orphaned son of an American medical team, who was raised in a Himalayan lamasery, where his parents had sacrificed their lives combating the dreaded Black Plague. After attaining the highest degree of mental and physical perfection, he was entrusted with the knowledge of the ancient scrolls that bore the secret writings of past generations of wise men.

Gillen joined ComicBook.com to discuss the series, which launches in January.

Since Peter Cannon: Thunderbolt is a property that has ties to Ozymandias from Watchmen, has any part of you been aware of what's going on with that character over in Doomsday Clock as you develop this? 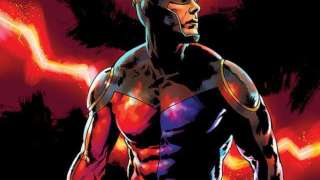 Only in the vaguest sense of "they are doing things." I don't have much interest in Ozymandias outside of and the influence Ozymandias and have had on the entire industry, genre, and medium. Which, of course, includes as a conceptual entity, but not in terms of anything it actually does bar "exist."

That was a serious answer. I swear, I'll throw in a joke soon enough.

Will this story use elements of his history -- either at Charlton or from the earlier Dynamite series -- to inform the world?

One interesting thing about Peter Cannon is how small the (ahem) canon is. Between the original 60s series, the DC run and Dynamite's previous book, there's only just over thirty issues with him as the star. In fact, as your first answer implies, if people know anything about Peter Cannon, it's likely that he was used as the inspiration to Ozymandias. There's certainly so little that "is" Peter Cannon that I've looked at all of it and tried to synthesize into a whole - the original 60s run, the DC run, the Dynamite run. It's not a comic which needs you to have read any of the previous Peter Cannon comics, but I certainly have.

But talking about history, bar the Watchmen angle, and the actual curious bit of history is part of his real-world history. Peter Cannon is actually owned by the estates of Pete Morisi, his original creator. In other words, it's a creator-owned superhero from an era which tended to have the rights consumed by the corporate bodies. When you compare and contrast to Watchmen's eventual fate, that's a fun one for me to think about.

What is it like, coming back to superheroes but doing it in a place where there are (I assume) a lot fewer variables and editorial edicts?

I stopped doing work at Marvel because I could feel that I was close to burning out, and I was aware the work would suffer. So, part of doing Peter Cannon: Thunderbolt was knowing it's been a few year's gap, and feeling the urge to come back and re-engage with the genre, but to do so in a way where we could just really go for it. It's really a gang mentality book. The core team - Caspar, Mary, Hassan and myself - have just made a DM chat on Twitter where we can gibber at each other, and we know that whatever we talk about? It's it. We don't need to worry about another team elsewhere accidentally stepping on our toes. We can just gleefully go about making the best superhero comic on the stands.

Seriously, it's a case that we have an idea, an approach, a mood, and a statement, and we get to hit everything we like. It's a book that's hopefully both smart and utterly gleeful, and I'm sure people are going to pick this up and just feel the enthusiasm bubbling off the pages. I've said elsewhere that it's an event-scale superhero comic but with you just having to buy a single book. In times of austerity, by Peter Cannon.

Dynamite has been amazingly supportive. It's very much them showing us the field and urging us to run.

Ignoring the fact that everybody's going to reference Watchmen, what do you think is the core of the appeal of this character for people who are not super familiar?

Going back to the Charlton issues, what fascinates me is how utterly reluctant Peter Cannon is to get involved. He mostly wants to chill with his best mate, Tabu. Stories are often about the push and pull between Peter Cannon (who wants to just study the ancient scrolls and be left alone) and Tabu (who wants him to go and be the Superhero Thunderbolt.) This happens again and again through the run, almost to the point of comedy. It's rare that you see a superhero who needs as much pushing to do something. The push and pull between Peter Cannon the man and Thunderbolt the hero is the interesting weird part of it, and I've definitely done a lot of work thinking about that.

I've ended up unpacking this a bunch, and we're led to someone who's Sherlock-Holmes smart, with a similar distance, but has nothing but contempt for the world's mainstream civilizations. Why be a superhero when this is the world he's protecting? At the same time he doesn't - as Ozymandias did in Watchmen - fall into the trick of believing just because he knows more he gets to tear it all down. He's an interesting guy, basically - we've created a bunch of more standard-motivation superheroes to add to this world, and Peter Cannon immediately stands out.

What differentiates this run from the last few takes we have seen since Charlton folded?

Well, the other takes on Peter Cannon haven't wanted to demolish the genre and then invite everyone in the world to party until dawn in the rubble.

The two main takes on Peter Cannon have been interesting, but have a different aim. Mike Collins' DC was about integrating it with the DC universe while building upon those original issues. The Alex Ross/Steve Darnall/Jonathan Lau Dynamite series was an attempt to provide a smart reading of the old Charlton stories to create a modern superhero novel.

While I've done all the work on Thunderbolt to make him a character I think works well and in a novel way in 2018 in exactly the same way the other two runs have for their period, my aim is wider. I'm looking at the impact of the ideas this character provoked and how they impacted the world. As such, it's a book about what we do with this genre, and where it's got us.