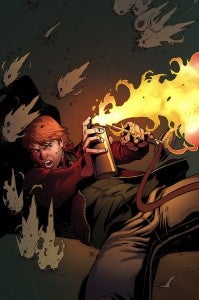 For the first time in decades, MacGyver will return in a new miniseries called Fugitive Gauntlet that will put to the test his legendary ability to get out of any bind with nothing but duct tape and a paperclip.

This time, though, the miniseries will be published by Image Comics. MacGyver's creator, Lee David Zlotoff, will co-write the series with Tony Lee of Dr. Who fame and artist Will Sliney, best known for his work on Farscape. Andie Tong will provide covers.

Zlotoff will provide backmatter for the series, as well.

"I've been a fan of the TV show since I was a kid, and whenever I was asked what my dream project would be at conventions, only one name ever came up," said Lee im a press release. "The biggest issue the TV show had was budget, and comics don't have that problem. We have MacGyver traveling to African jungles, Cairo, even Moscow in a globe-trotting adventure that—short of a big budget feature film—could never have been done before in such scale and scope."

The series will reportedly revolve around industrial espionage and MacGyver globetrotting with a million-dollar bounty on his head--pretty familiar territory for the character, except that the technology and methods of industrial espionage have changed quite a bit since he had an adventure last.

It may be interesting to see how the character adapts to the changes.

"In the last decade or so, the graphic novel and comics arena has simply exploded in terms of both the kinds of stories that are being told and the range of artistic styles now being explored," Zlotoff said. "So as I considered the constant call from fans around the world to bring MacGyver back, it struck me that the simplicity and directness of comics might be the perfect place to start.”