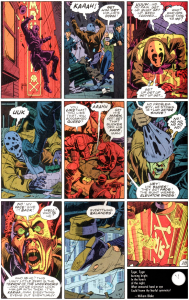 I've been thinking a lot about Watchmen, 6- or 9-panel page layouts, poetry, meter, and iambic pentameter... Wait, don't go to another webpage! This will be interesting, I promise!

Lately, I've had Alan Moore and Dave Gibbons' masterpiece Watchmen on hand as my go-to reading material for when I've had a free minute and I've read through it a few times over the past few weeks. If you aren't familiar with Watchmen (and if you aren't, you should be) every page is laid out in a 9-panel grid.

Sometimes panels are combined (fig. 2 directly below and at left) and sometimes the same image continues across multiple panels with time passing and plot advancing from panel to panel (fig. 3, below and at right), but at all times it is in the context of a 9-panel grid. The masterful use of the 9-panel format and the ways in which it is utilized in interesting ways to artfully bring the world of the novel to life is, in my opinion, one of the great strengths of the work. 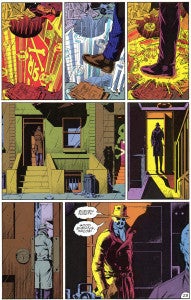 Keeping up with my current comic reading, it seems like traditional paneling is more-or-less a thing of the past. Obviously, there is a certain amount of personal taste involved in one's feelings about the use of regular panel layouts, but is there something that can be said about the artistic potential of paneling? Are there parallels to other artistic forms? What is traditional panneling to the comic medium?

Recently, I stumbled across a piece of media that a gentleman, Kyle Kallgren, who goes by the moniker Oancitizen produced for the website That Guy With the Glasses. He released a video describing a variety of concepts used in poetry and related them to popular music, particularly the music of The Beatles. One concept in particular was that of meter. Without going into too much detail, meter is the grouping of stressed and unstressed syllables in lines of verse. One example is the five pairs of one unstressed and one stressed syllable comprising the iambic pentameter of Shakespeare.

This led me further to consider what I've always thought of as the overly structured and constrained form of the sonnet. In the sonnet, almost everything is specified with rigid formality. The number of lines is to be 14, each line is (most often) to be written in iambic pentameter, rhyme scheme can be Spenserian or Shakespearean. Producing art within structure, is there a point? What is to be gained by producing art within a framework as opposed to working in the mostly unrestrained form of free verse? 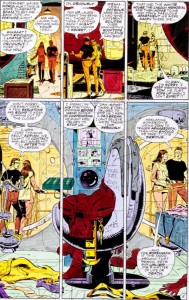 You might be asking yourself what this has to do with comics. Well, let's think for a moment of the 6- or 9-panel page layout as the sonnet form or iambic pentameter of comics. By that logic, the decompressed, splash-page heavy modern style might be the free verse of comics. Using that as a framework, perhaps comic structure may serve a similar purpose to poetic structure.

Having had some experience with the works of Shakespeare from an acting and an academic perspective, I'm most familiar with the workings of iambic pentameter. In the works of Shakespeare, iambic pentameter provides structure and musicality. Language flows in a particular way due to this structure. In comics, a panel layout can help to dictate the flow of a comic in a similar manner. More panels such as the image below of Captain America tangling with Batroc (drawn by Jack Kirby) can convey a frantic pace with many distinct and forceful actions. Conversely, fewer panels might imply a slower pace.

If you ask me though, the most important aspect of structure is the opportunity to deviate from that structure to artistic effect. In Shakespeare's plays, some of the most interesting moments come when he allows a character to fall out of the form. Hamlet's famous "To be or not to be" speech from Act 3 scene 1 of his eponymous play deviates heavily from iambic pentameter revealing a disordered mind.

Similarly, Richard III's mental state the night before he is to die is revealed in a speech from his eponymous play's Act 5 scene 5 which is all over the place in terms of meter and the stressing of syllables. Similarly, in comics deviation from structure can accomplish artistic ends that are otherwise difficult to replicate. Going back to Watchmen as an example, the scenes of Dr. Manhattan considering his past reveal a deviation from form which is quite striking. In comics, we expect time to flow linearly from panel to panel. By jumping back and forward through time between panels, the reader is brought into Manhattan's conception of time in a way that would be difficult to replicate otherwise. Moore accomplishes a similar artistic feat in Nemo: Heart of Ice with artist Kevin O'Neill. 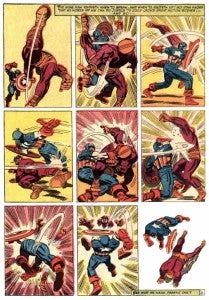 Additionally, reading through Watchmen becoming accustomed to the 9-panel page, the combined panels or groups of panels where actions stretch across a single image become much more impactful. Specifically, I defy anyone to try to tell me that the scene of Adrian Veidt foiling his attempted assassin, which stretches across two pages of the comic, would have had nearly the same startling impact that it does if the reader had not been previously accustomed to the 9-panel structure. Similarly, if Watchmen were strewn with splash pages in the modern style, would the depiction of the climax have been the same punch in the gut to the reader?

On a basic level though, meter, rhyme scheme, and structure let me know that I am reading a poem. There is something familiar about structure, something traditionally inherent to the form, that is comforting and familiar when one experiences it. Similarly, every now and again, I just want a traditionally formatted comic. I want a comic that feels in some indefinable way like a comic. That is another example of what the 6- or 9-panel page can achieve for the comic reader.

As a poetry layman, it seems to me that structure was something that was to some degree imposed upon poets in times gone by with free verse emerging as attitudes to the form relaxed. Similarly, in modern comics anything that can be put onto a page can be printed into a comic. The technical restriction of days gone by no longer apply. However, as older poetic form still have value, so to do the artistic and structural traditions of comics have value.

In the final analysis, as not all poetry should be formally structured and there is a place for free verse, comics have a place both for rigid panel structure and for the modern style. It seems to me that the modern comic practitioner should be aware of and well-versed in comic tradition and prepared to both embrace and subvert it to greatest effect. Additionally, I would suggest that the novice comic artist or writer develop a firm mastery of traditional comic structure before attempting to implement professionally some more adventurous or experimental styles. It is mastery of the conventions of a form that allows a practitioner to know how and when to conform to or divert from those conventions.

On Watchmen And Shakespeare, the 9-Panel Grid And Iambic Pentameter