BOOM! Studios dedicating WWE #13 to the flagship WWE program, and the action-packed issue will include several stories from the show's long and tenured history. The issue will feature rumbles between Seth Rollins and Samoa Joe, Jeff Hardy and the Undertaker (during his American Bad Ass phase), and Chris Jericho's bromance with Kevin Owens, including the epic betrayal by Owens at the Festival of Friendship.

WWE #13 will also include a story about Samoa Joe's debut on the main roster, which is written by Joe himself. The main cover of the issue also teases stories based on Shawn Michaels and Triple H, old-school Chris Jericho, classic Undertaker, Mankind, and Daniel Bryan. 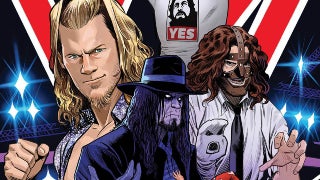 You can check out an exclusive preview in the gallery and the official solicitation details are included below.

Synopsis: "Celebrate the 25th Anniversary of WWE Monday Night Raw with stories from every era of the flagship show in sports entertainment history, including a story co-written by WWE Superstar Samoa Joe on how he joined the WWE Raw Roster."

Assassin's Creed Creator Reveals Why It's No Longer a Stealth Series