DC has revealed first looks at the 7 out of the 8 upcoming variant covers commissioned from comics superstars, each of which will celebrate a decade in the life of Superman as Action Comics reaches 1,000 issues in April.

The covers, some of which feature period-accurate creators and/or trade dress, will ship with the oversized paperback, which marks the end montly Superman comics for writers Dan Jurgens (Action Comics), Peter J. Tomasi & Patrick Gleason (Superman).

Along with the covers, DC's May solicitations gave release dates for DC Nation #0, which will give a look at ahead at Brian Michael Bendis's Man of Steel miniseries and for Action Comics and Superman one-shots which will provide the swan songs for the outgoing writers.

In the attached image gallery, fans can get their first look at the following covers: 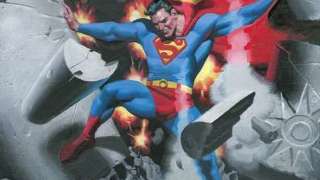 A 1980s cover by Joshua Middleton has not yet been released as of this writing.

Some of the covers feel rather obvious -- Jurgens and Bermejo both had major Superman stories or runs during their periods, while Allred and Rude are well known for their ability to ape the styles of their own decades.

Steranko, a superstar in the '70s, did most of his work at Marvel and has hardly ever drawn for DC, although he did contribute a Superman pin-up to The Superman Gallery, a one-shot that was released in 1992 during a period when the character, having just died at the hands of Doomsday, was the hottest thing in comics.

Jurgens, who wrote and drew that death, was one of the most important creative voices on Superman in the 1990s. Interestingly, Kevin Nowlan also inked Jurgens's cover to his final issue of Superman in 1999.

You can see the images in the attached gallery.

In addition to a story by Brian Michael Bendis, the return of Superman's red trunks, and lots more, Action Comics #1000 will feature a story by DC chief creative officer Geoff Johns and Superman: The Movie director Richard Donner.